Nevada County is a county located in the southwestern part of the U.S. state of Arkansas. As of the 2010 census, the population was 8,997, less than half of its peak in 1920. The county seat is Prescott. Nevada County is Arkansas's 63rd county, formed during the Reconstruction era on March 20, 1871, from portions of Hempstead, Ouachita and Columbia counties. It was named after the state of Nevada because of the perceived similarity between their physical shapes; the Arkansas county's shape, inverted, roughly follows the same outline as the state's boundary. It is an alcohol prohibition or dry county.

Dorcheat Bayou, a 122-mile stream, begins in Nevada County. It flows south into Columbia County and across the border into Webster Parish, Louisiana, where it flows into Lake Bistineau and ultimately Loggy Bayou, forming a continuous passage to the Red River. In the 19th century, the bayou was navigable for three to six months by steamboat from Bistineau to Minden. The watershed had fertile farmland, timberland and swampland. The bayou is now popular for fishing and its natural environment.

According to the U.S. Census Bureau, the county has a total area of 621 square miles (1,610 km2), of which 618 square miles (1,600 km2) is land and 2.8 square miles (7.3 km2) (0.5%) is water. The county is bounded on the north by the Little Missouri River, a branch of the Ouachita River, and drained by several tributaries of that stream and of Red River. Nevada County is alternately considered as part of the greater regions of South Arkansas or Southwest Arkansas.

The population declined by more than half from 1920 to 1970, due to mechanization of agriculture and the decline of the lumber industry causing loss of jobs. In addition, blacks left in the Great Migration to midwestern and western industrial cities, where they found better work and less social oppression. 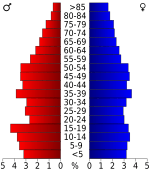 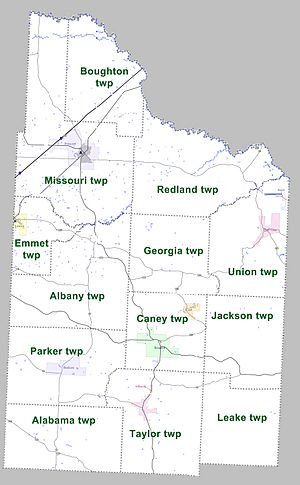 Townships in Nevada County, Arkansas as of 2010

Townships in Arkansas are the divisions of a county. Each township includes unincorporated areas; some may have incorporated cities or towns within part of their boundaries. Arkansas townships have limited purposes in modern times. However, the United States Census does list Arkansas population based on townships (sometimes referred to as "county subdivisions" or "minor civil divisions"). Townships are also of value for historical purposes in terms of genealogical research. Each town or city is within one or more townships in an Arkansas county based on census maps and publications. The townships of Nevada County are listed below; listed in parentheses are the cities, towns, and/or census-designated places that are fully or partially inside the township.

All content from Kiddle encyclopedia articles (including the article images and facts) can be freely used under Attribution-ShareAlike license, unless stated otherwise. Cite this article:
Nevada County, Arkansas Facts for Kids. Kiddle Encyclopedia.