Lafayette County is a county located in the U.S. state of Arkansas. As of the 2010 census, the population was 7,645, making it the third-least populous county in Arkansas. The county seat is Lewisville. Lafayette County was formed on October 15, 1827 and named in honor of the Marquis de Lafayette, a French military hero of the American Revolutionary War. It is a dry county; therefore, the sale of alcohol is prohibited. 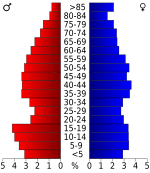 Prior to 2000, Lafayette County was considered an "ancestral" Democratic county, with exceptions for the 1972 and 1984 landslides of Richard Nixon and Ronald Reagan, respectively. Former Governor Bill Clinton won this county twice in his presidential runs: 1992 and 1996. Clinton's vice president, Al Gore, won the county in 2000, the most recent Democrat to do so.

Over the past few election cycles Lafayette County, like all of the traditionally secessionist Upland South, has turned sharply rightward and away from a more socially liberal Democratic Party than the one Clinton led. Donald Trump won 61% of the vote in 2016 over former Arkansas First Lady and U.S. First Lady Hillary Clinton, owing both to the strength of Trump in rural America and the decline of the Clinton brand in their home state.

Townships in Arkansas are the divisions of a county. Each township includes unincorporated areas; some may have incorporated cities or towns within part of their boundaries. Arkansas townships have limited purposes in modern times. However, the United States Census does list Arkansas population based on townships (sometimes referred to as "county subdivisions" or "minor civil divisions"). Townships are also of value for historical purposes in terms of genealogical research. Each town or city is within one or more townships in an Arkansas county based on census maps and publications. The townships of Lafayette County are listed below; listed in parentheses are the cities, towns, and/or census-designated places that are fully or partially inside the township.

All content from Kiddle encyclopedia articles (including the article images and facts) can be freely used under Attribution-ShareAlike license, unless stated otherwise. Cite this article:
Lafayette County, Arkansas Facts for Kids. Kiddle Encyclopedia.