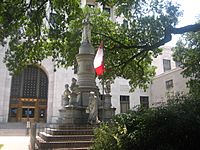 Confederate memorial on the grounds of the Caddo Parish Courthouse 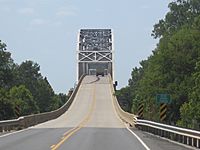 This bridge atop the Red River links Bossier and Caddo parishes just east of Hosston.

Caddo Parish (French: Paroisse de Caddo) is a parish located in the U.S. state of Louisiana. As of the 2010 census, the population was 254,969, making it the fourth-most populous parish in Louisiana. The parish seat is Shreveport.

In 1838, Caddo Parish was carved from Natchitoches Parish; the legislature named it for the indigenous Caddo Indians.

The 2nd Squadron of the 108th Cavalry Regiment (formerly 1-156 Armor Battalion until September 2006) is headquartered in Shreveport at the intersection of Stoner Avenue and Youree Drive. Since the Civil War, this armory has been known by locals as "Fort Humbug"; Shreveport served as the state capital after Union forces had seized Baton Rouge. This site was designated as "Fort Turnball" by the Daughters of the Confederacy in 1920 and served as a mobilization site during World War II. This unit has served two tours of duty in Iraq (2004-05 & 2010) as part of the 256th Infantry Brigade of the Louisiana National Guard.

All content from Kiddle encyclopedia articles (including the article images and facts) can be freely used under Attribution-ShareAlike license, unless stated otherwise. Cite this article:
Caddo Parish, Louisiana Facts for Kids. Kiddle Encyclopedia.