From 1938 to 1946 and again from 1962 to 1966, the Vivian mayor was Earl G. Williamson, a political mainstay in northern Caddo Parish who also served on the then-police jury from 1933 to 1972 and again from 1979 to 1980. State law at the time permitted Williamson to occupy both posts. Williamson was succeeded as mayor in 1966 by Jimmy Wilson, a grocer and banker, who served until 1972, when he won his only term in the Louisiana House of Representatives. Wilson was the Republican candidate for the United States House of Representatives from Louisiana's 4th congressional district in 1978 and 1980.

Jasper "Jake" Smith, III (born 1935), a son of the late State Representative Jasper K. Smith, was reared in Vivian and recalls his hometown fondly in the 1940s in his memoir, Dinner with Mobutu: A Chronicle of My Life and Times:

"Vivian is fifty miles from Texarkana, and that was about as close as you could get and still be in Louisiana. Vivian [is] surrounded by the smaller towns of Rodessa, Ida, Oil City, Belcher, Gilliam, and Hosston. Vivian was the 'urban center' where citizens from the smaller towns came to shop, go to the movies, join in the excitement of city life as it was. To us, Vivian was the hub of the universe. At least it was the 'Heart of the ArkLaTex,' as folks down here liked to claim."

According to the United States Census Bureau, Vivian has a total area of 5.5 square miles (14.2 km2), all of it land. 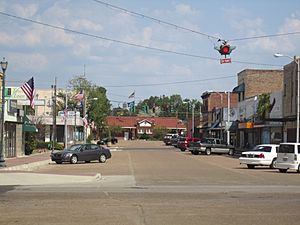 A look at downtown Vivian 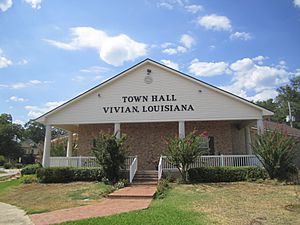 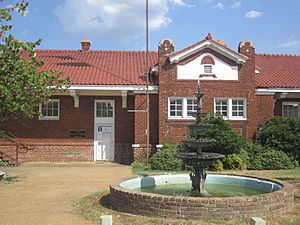 There were 1,569 households out of which 32.3% had children under the age of 18 living with them, 42.2% were married couples living together, 19.4% had a female householder with no husband present, and 35.0% were non-families. 31.7% of all households were made up of individuals and 17.0% had someone living alone who was 65 years of age or older. The average household size was 2.51 and the average family size was 3.16.

Vivian is part of the Shreveport–Bossier City Metropolitan Statistical Area.

Vivian has been the location of several recent films.

All content from Kiddle encyclopedia articles (including the article images and facts) can be freely used under Attribution-ShareAlike license, unless stated otherwise. Cite this article:
Vivian, Louisiana Facts for Kids. Kiddle Encyclopedia.