Caddo Lake (French: Lac Caddo) is a 25,400-acre (10,300 ha) lake and bayou (wetland) on the border between Texas and Louisiana, in northern Harrison County and southern Marion County in Texas and western Caddo Parish in Louisiana. The lake is named after the Southeastern culture of Native Americans called Caddoans or Caddo, who lived in the area until their expulsion in the 19th century. It is an internationally protected wetland under the Ramsar Convention and includes one of the largest flooded cypress forests in the United States. Caddo is one of Texas's few non-oxbow natural lakes and is the second-largest in the South; however, it was artificially altered by the addition of a dam in the 1900s. 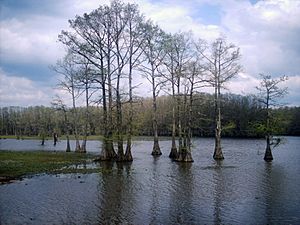 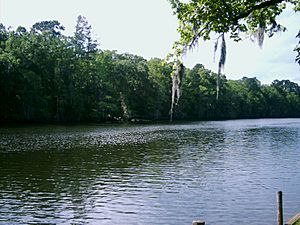 The Channel was used by steamboats to reach the port at Jefferson, until water levels fell after the removal of the Great Raft.

Caddo Lake has been utilized by Native Americans for thousands of years, but substantial commercial development would only begin with invention of the steamboat and US annexation of Louisiana and Texas by treaty (Texas is the only State in the United States to have joined by treaty instead of annexation) in the 19th century. The cities of Port Caddo, Swanson's Landing, and Jefferson in Texas, and Mooringsport in Louisiana, had thriving riverboat ports on the lake. Gradually as the log jams were removed in the lake and on the Red River by Captain Henry Miller Shreve and then by the Army Corps of Engineers, the lake changed shape and eventually fell over 10 feet, destroying the East Texas ports and their riverboat industry.

Industry once again came to Caddo Lake with the discovery of oil beneath it. ]</ref>

Oil derricks sprang up throughout the lake, around the turn of the 20th century, further damaging the fragile ecosystem. The oil industry left Caddo for richer fields at Kilgore and other locations in Texas. Texas tried to preserve parts of Caddo in 1934 by establishing a state park, constructed by the WPA. The establishment of the Longhorn Army Ammunition Plant on the shores of Caddo, in the mid-20th century, polluted large portions of the surrounding wetlands until its closure in the 1990s. Most of the former plant site is now a federal wildlife refuge.

An ecologist named Lionel Janes conducted a survey of Caddo Lake (called Ferry Lake at the time) in 1913 and 1914. Based on an examination of cross sections of bald cypress and hardwood trees and many dead stumps he estimated that the lake came into existence sometime between 1770 and 1780.

In 1993 Caddo Lake preservation entered a renaissance, with the announcement that 7,000 acres (28 km²) of Caddo purchased by the Nature Conservancy were to be merged with the 483 acre (2 km²) Texas Caddo Lake State Park to become the Caddo Lake State Park and Wildlife Management Area. As a result of efforts by the Caddo Lake Institute (co-founded by Don Henley and Dwight K. Shellman), in October 1993 Caddo Lake became one of thirteen areas in the United States protected by the Ramsar Convention. As of 2003 Caddo Lake flora and fauna consisted of 189 species of trees and shrubs, 75 grasses, 42 woody vines, 216 kinds of birds, 90 fish and reptiles, and 47 mammals. One of these species, Crataegus opaca or mayhaw, produces fruit which is used for making jelly. Forty-four of Caddo's native species were either endangered, threatened or rare. From 2001 until 2003 Caddo Lake residents fought a legal battle with the City of Marshall, Texas over water rights.

The lake is currently "under siege" by a fast-spreading, Velcro-like aquatic fern, Salvinia molesta, also known as Giant Salvinia. Accidentally introduced to the lake by boaters, the noxious weed doubles in size every two to four days, rapidly killing off life below the surface. Most of the growth of the plant is currently on the Louisiana side, where officials have been focused on recovering from damage caused by Hurricanes Katrina and Rita in 2005.

Since 1965 Texas's Caddo Lake has had hundreds of alleged Bigfoot sightings according to the North American Wood Ape Conservancy (NAWAC), as reported in the Travel Channel 2006 documentary Bigfoot.

Cities and towns on Caddo Lake

All content from Kiddle encyclopedia articles (including the article images and facts) can be freely used under Attribution-ShareAlike license, unless stated otherwise. Cite this article:
Caddo Lake Facts for Kids. Kiddle Encyclopedia.