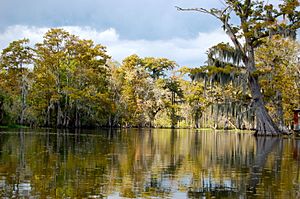 In usage in the United States, a bayou is a body of water typically found in a flat, low-lying area, and can either be an extremely slow-moving stream or river (often with a poorly defined shoreline), or a marshy lake or wetland. The term bayou can also refer to a creek whose current reverses daily due to tides, and which contains brackish water highly conducive to fish life and plankton. Bayous are commonly found in the Gulf Coast region of the southern United States, notably the Mississippi River Delta, with the states of Louisiana, Arkansas and Texas being famous for them. A bayou is frequently an anabranch or minor braid of a braided channel that is moving much slower than the mainstem, often becoming boggy and stagnant. Though fauna varies by region, many bayous are home to crawfish, certain species of shrimp, other shellfish, catfish, frogs, toads, salamanders, newts, American alligators, American crocodiles, herons, lizards, turtles, tortoises, spoonbills, snakes, leeches, and many other species.

The word entered American English via Louisiana French in Louisiana and is thought to originate from the Choctaw word bayuk, which means "small stream". The first settlements of Bayou Têche and other bayous were founded by the Louisiana Creoles, and that is why the bayous are commonly associated with Creole and Cajun culture.

Alternative spelling, "buyou", is also known to have been formerly in use, as in "Pine Buyou", used in a description by Congress in 1833 of Arkansas Territory.

The term Bayou Country is most closely associated with Cajun and Creole cultural groups derived from French settlers and stretching along the Gulf Coast from Houston, Texas to Mobile, Alabama and picking back up in South Florida around the Everglades with its center in New Orleans, Louisiana.

Houston has the nickname "Bayou City". As of 2016[update] "bye-you" is the most common pronunciation, while a few use "bye-oh", although that pronunciation is declining.

The Illinois Bayou in Arkansas harks back to the original meaning and maybe the only bayou with whitewater rafting. It meets neither of the definitions above.

All content from Kiddle encyclopedia articles (including the article images and facts) can be freely used under Attribution-ShareAlike license, unless stated otherwise. Cite this article:
Bayou Facts for Kids. Kiddle Encyclopedia.