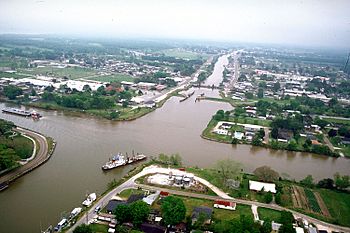 The intersection of Bayou Lafourche and the Gulf Intracoastal Waterway at Larose, Louisiana. View is to the east-southeast. The bayou runs off towards the Gulf at the top. The waterway crosses the picture left–right. The U.S. Army Corps of Engineers has installed a floodgate on the bayou, visible at center.

Bayou Lafourche, originally called Chetimachas River or La Fourche des Chetimaches, (the fork of the Chitimacha), is a 106-mile-long (171 km) bayou in southeastern Louisiana, United States, that flows into the Gulf of Mexico. The bayou is flanked by Louisiana Highway 1 on the west and Louisiana Highway 308 on the east, and is known as "the longest Main Street in the world." It flows through parts of Ascension, Assumption, and Lafourche parishes. Today, approximately 300,000 Louisiana residents drink water drawn from the bayou.

The name Lafourche is from the French for "the fork", and alludes to the bayou's large outflow of Mississippi River water. The first settlements of Acadians in southern Louisiana were near Bayou Lafourche and Bayou des Écores, which led to a close association of the bayou with Cajun culture.

It was formerly a Mississippi River outlet (distributary), but was dammed at Donaldsonville in 1905. The dam cut off nourishment and replenishment of a huge wetland area of central Louisiana. It changed the formerly flowing bayou into a stagnant ditch.

The Bollinger Shipyards, founded by Donald G. Bollinger, was launched on Bayou Lafourche in 1946. 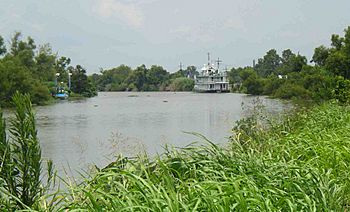 A project to reconnect Bayou Lafourche to the Mississippi River at Donaldsonville is under design. The plan is to use a control structure to regulate the water discharge. The purpose is to mitigate the accelerated land loss that followed the interruption of the distributary flow, and to improve water quality in the bayou.

From north to south, the following roads and railroads cross the bayou (almost all connecting LA 1 to LA 308):

All content from Kiddle encyclopedia articles (including the article images and facts) can be freely used under Attribution-ShareAlike license, unless stated otherwise. Cite this article:
Bayou Lafourche Facts for Kids. Kiddle Encyclopedia.