Thibodaux ( TIB-ə-doh) is a city in and the parish seat of Lafourche Parish, Louisiana, United States, along the banks of Bayou Lafourche in the northwestern part of the parish. The population was 14,567 at the 2010 census. Thibodaux is a principal city of the Houma–Bayou Cane–Thibodaux Metropolitan Statistical Area.

The first European colonists were French, who settled here in the 18th century when the area was claimed as part of La Louisiane. They imported African slaves as workers and developed sugar cane plantations.

This was incorporated as a town in 1830 under the name Thibodauxville, in honor of local planter Henry Schuyler Thibodaux. He provided land for the village center and served as acting governor of Louisiana in 1824. The area was developed in the antebellum period for sugar cane plantations, and Thibodaux was the trading center of the agricultural area. 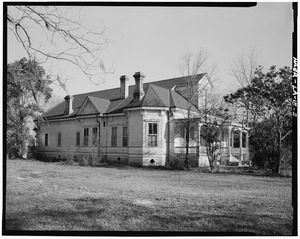 The name was changed to Thibodeaux in 1838. The current spelling Thibodaux was officially adopted in 1918.

In 1896, the first rural free delivery of mail in Louisiana began in Thibodaux. It was the second such RFD in the United States.

In October 1862, following the Battle of Georgia Landing (Labadieville), Thibodaux was occupied by the Union Army under Godfrey Weitzel. Before they left the city, the Confederates under General Alfred Mouton (later killed in the Battle of Mansfield in De Soto Parish), burned the depot, the bridges, sugar, and supplies that they could not carry with them. In 1863, the Union under James P. Major temporarily abandoned Thibodaux but soon returned.

"terrified Negroes and whites raced into the town announcing that 3,000 Confederate cavalrymen were en route to attack Thibodaux and Lafourche Crossing. Union Colonel Thomas W. Cahill ordered an immediate retreat. The bayou bridges were burned, three field guns were destroyed, and as many of the men and the horses as possible were loaded . . . and ordered to Raceland. . . . Ammunition was destroyed, horses abandoned, and four field pieces were left behind.

Once the area was under Union control, they ordered the slaves freed and to be paid wages. Planters in Thibodaux complained about having to negotiate labor contracts for the black workers. Alexander F. Pugh, a large sugar planter near Thibodaux, complained that

"Negroes and federal officers took up too much time in negotiating new labor contracts. Part of the delay was occasioned by the fact that the Negroes were dissatisfied with the settlements from the past year, and additional delays were brought about because of changes in labor rules and regulations." Pugh wrote in his diary: "I have agreed with the Negroes today to pay them monthly wages. It was very distasteful to me, but I could do no better. Everybody else in the neighborhood has agreed to pay the same, and mine [laborers] would listen to nothing else."

In the late 19th century, after having taken back control of the state government following the Reconstruction era by use of paramilitary forces such as the White League, which suppressed black voting, white Democrats continued to consolidate their power over the state government. In the late 1880s they were challenged temporarily by a biracial coalition of Populists and Republicans.

From 1880, through the Louisiana Sugar Producer's Association, some 200 major planters worked to regain more control of their workers, adopting uniform pay, withholding 80 percent of the workers' pay until after harvest, making them accept scrip redeemable only at plantation stores. There was repeated labor unrest as cane workers struck intermittently against conditions.

The Knights of Labor organized a chapter in 1886 in Shreveport, and attracted many cane workers seeking better conditions. A sugar cane workers' strike culminated in the "Thibodaux massacre" of November 22, 1887, one of the bloodiest labor disputes in U.S. history. The strike for higher wages of 10,000 workers (1,000 of whom were white) was organized by the Knights of Labor during "rolling period," a critical element of the sugar cane harvest. Planters were alarmed both by outside labor organizations and the thought of losing their total crops.

The governor called in the State militia at the planters' request, who protected strikebreakers and evicted black workers. The strike was broken in Terrebone Parish.

Paramilitary forces closed off Thibodaux, where numerous black workers had taken refuge. On November 22, they began action against the black workers and their families, killing at least 50. Casualties including wounded and missing were told as in the hundreds, but the numbers will always be uncertain. The cane workers returned to the plantations. In the following months, Knights of Labor organizers continued to disappear. The massacre and subsequent disenfranchisement of blacks, and imposition of Jim Crow, ended labor organizing of cane workers until the 1940s.

According to the United States Census Bureau, the city has a total area of 5.47 square miles (14.2 km2), all land. 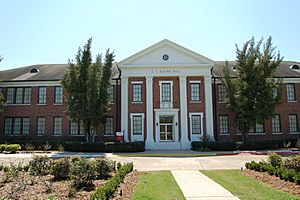 Charles C. Elkins Hall is one of twenty-eight sites in Thibodaux listed on the National Register of Historic Places.

There were 5,500 households out of which 29.7% had children under the age of 18 living with them, 38.1% were married couples living together, 19.4% had a female householder with no husband present, and 39.0% were non-families. 31.1% of all households were made up of individuals and 11.5% had someone living alone who was 65 years of age or older. The average household size was 2.42 and the average family size was 3.10. 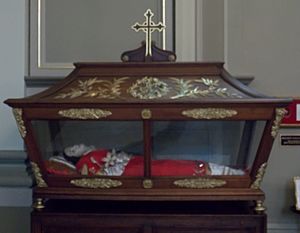 The Roman Catholic patron saints of Thibodaux are Saint Valérie, an early Christian martyr, and Saint Vitalis of Milan, her husband, also a martyr. A life-sized reliquary of Saint Valérie, containing an arm bone, was brought to Thibodaux in 1868 and is displayed in her shrine in St. Joseph Co-Cathedral in Thibodaux. A smaller reliquary, with a relic of St. Vitalis, is displayed near St. Valérie's reliquary. St. Valérie has traditionally been invoked for intercession in protecting Thibodaux from hurricanes.

Richard D'Alton Williams, a well-known 19th-century Irish patriot, poet, and physician, died of tuberculosis in Thibodaux in 1862, and is buried in St. Joseph Cemetery. His headstone was erected that year by Irish members of the 8th New Hampshire Volunteer Infantry, then encamped in Thibodaux. A famous Mississippi blues musician, Eddie "Guitar Slim" Jones, is buried in Thibodaux, where he often played, and where his manager, Hosea Hill, resided. Two-term Governor of Louisiana; Francis T. Nicholls is buried in the Episcopal Cemetery on Jackson Street.

The family name "Thibodaux" is mentioned in Hank Williams' "Jambalaya (On The Bayou)". In 1972 Leon Russell had the song "Cajun Love Song" in which Thibodaux is mentioned. It is also mentioned in the 1970s Jerry Reed song "Amos Moses," in the 1990s George Strait song "Adalida," in Dan Baird's 1992 song "Dixie Beauxderaunt," the 1999 Jimmy Buffett song "I will Play for Gumbo," the 2008 Toby Keith song "Creole Woman," and its name is the title of a song by jazz songstress Marcia Ball.

All content from Kiddle encyclopedia articles (including the article images and facts) can be freely used under Attribution-ShareAlike license, unless stated otherwise. Cite this article:
Thibodaux, Louisiana Facts for Kids. Kiddle Encyclopedia.