Gulf of Mexico facts for kids 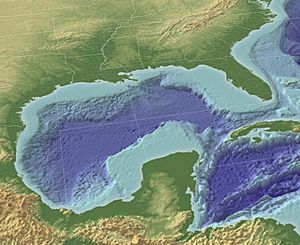 The Gulf of Mexico

The Gulf of Mexico is a round sea, called a gulf. Land in North America is around much of it. The United States of America, Mexico, and Cuba are the countries around it. The Straits of Florida connect to the Atlantic Ocean, and the Yucatán Channel connects to the Caribbean Sea.

Petroleum is found near the north and west coast of this gulf. Many hurricanes hit this area, for example, Hurricane Katrina and Hurricane Rita hurt many of the oil wells in 2005 in the United States. There is also a big fishing industry in the gulf.

All content from Kiddle encyclopedia articles (including the article images and facts) can be freely used under Attribution-ShareAlike license, unless stated otherwise. Cite this article:
Gulf of Mexico Facts for Kids. Kiddle Encyclopedia.