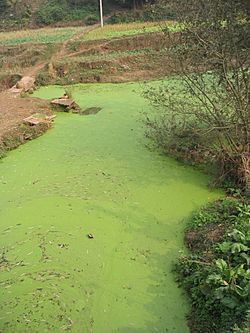 Algal blooms can present problems for ecosystems and human society

Algal blooms are often caused by eutrophication. Eutrophication occurs when abnormal amount of nutrients, especially phosphorous and nitrogen, enter a body of water. Algal blooms are a big problem to ecosystems because, like any sudden unnatural growth, it harms the other animals in that ecosystem, usually decreasing their numbers quickly. The abundance of algae in algal blooms causes layers of algae that are unable to get sunlight, and this causes the algae to die and start to decompose. The top layers of algae is able to photosynthesize and continue living. The lack of nutrients and dissolved oxygen in the water inhibits other life. Fish become unable to breathe and other aquatic vegetation cannot photosynthesize. All the organisms in the water start to die and decompose. The decomposition of the dead organisms use up most of the remaining dissolved oxygen in the water. Without a sufficient amount of nutrients and dissolved oxygen all living organisms in the water die which leads to a dead zone.

All content from Kiddle encyclopedia articles (including the article images and facts) can be freely used under Attribution-ShareAlike license, unless stated otherwise. Cite this article:
Algal bloom Facts for Kids. Kiddle Encyclopedia.