Structure of a cyanobacterium

O2 build-up in the Earth's atmosphere. Red and green lines represent the range of the estimates while time is measured in billions of years ago. 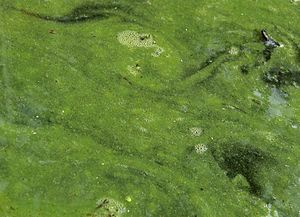 "Bloom" of cyanobacteria, in a pond

Cyanobacteria are a taxon of bacteria which conduct photosynthesis. They are not algae, though they were once called blue-green algae. It is a phylum of bacteria, with about 1500 species. In endosymbiont theory, chloroplasts (plastids) are descended from cyanobacteria. Their DNA profile is evidence for this.

Cyanobacteria have an extremely long fossil record, starting at least 3,500 million years ago. They were the main organisms in the stromatolites of the Archaean and Proterozoic eons.

The ability of cyanobacteria to perform oxygenic photosynthesis is highly significant. The early atmosphere on Earth was largely reducing, that is, without oxygen. The cyanobacteria in stromatolites were the first known organisms to photosynthesise and produce free oxygen. After about a billion years, the effect of this photosynthesis began a huge change in the atmosphere. The process, called the Great Oxygenation Event, took a long time. Eventually, it killed off most of the organisms which could not live in oxygen, and led to the kinds of environment we know today, where most organisms use and need oxygen.

"In a single-celled pond slime, they observed how incoming rays are bent by the bug's spherical surface and focused in a spot on the far side of the cell. By shuffling along in the opposite direction to that bright spot, the microbe moves towards the light".

All content from Kiddle encyclopedia articles (including the article images and facts) can be freely used under Attribution-ShareAlike license, unless stated otherwise. Cite this article:
Cyanobacteria Facts for Kids. Kiddle Encyclopedia.