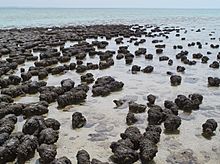 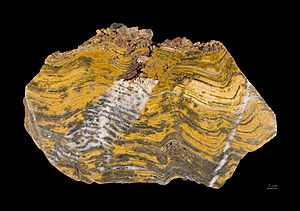 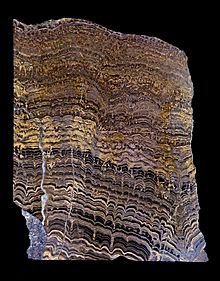 They are formed by bacteria such as cyanobacteria. There may also be other types of bacteria and single-celled algae.

The mucus secreted by the bacteria collects grains of sediment, and they are stuck together with calcium carbonate, also from the bacteria. This builds up into the structures seen in certain sea-shore bays. Cyanobacteria use water, carbon dioxide, and sunlight to create their food, and put out oxygen as a by-product.

The real significance of stromatolites is that they are the earliest fossil evidence of life on Earth. The oldest stromatolites are dated to 3,450 million years ago, during the Archaean eon.

The ability of cyanobacteria to perform oxygenic photosynthesis is highly significant. Early cyanobacteria in stromatolites are thought to be largely responsible for increasing the amount of oxygen in the primaeval Earth's atmosphere through their continuing photosynthesis. They were the first known organisms to photosynthesis and produce free oxygen. After about a billion years, the effect of this photosynthesis began to a huge change in the atmosphere. The process, called the Great Oxygenation Event, actually took a long time. Eventually, it killed off most of the organisms which could not live in oxygen, and led to the kinds of environment we know today, where most organisms use and need oxygen.

All content from Kiddle encyclopedia articles (including the article images and facts) can be freely used under Attribution-ShareAlike license, unless stated otherwise. Cite this article:
Stromatolite Facts for Kids. Kiddle Encyclopedia.