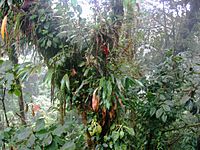 A number of different epiphytes on a tree in Costa Rica 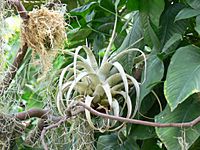 Bromeliad on a Cycad 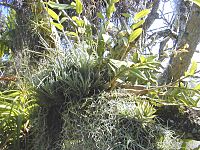 An epiphyte is a plant which grows on another plant, without being a parasite. The term is also be used for bacteria, fungi, lichens and mosses which grow on plants. However, most epiphytes (89%) are flowering plants; and about a third of all ferns are epiphytes.

An epiphyte gets its moisture and nutrients from the air and rain, and sometimes from debris accumulating around it. The ones in the temperate zone are often mosses, liverworts, lichens and algae, and in the tropics ferns, cacti, orchids, and bromeliads.

Sometimes such plants are called air plants, because they do not root in soil. This is misleading though, as there are many aquatic epiphytes as well. Epiphytic organisms only take support from the host; they are usually not parasites. Parasitic and semi-parasitic plants, like the mistletoe are not true epiphytes.

Epiphytes usually use photosynthesis to get energy; often they have adapted their leaves to be able to capture rainwater (and moisture from the air) if they are not aquatic.

Epiphytes are important for other species too, certain frogs live in the water reservoir of epiphytes.

All content from Kiddle encyclopedia articles (including the article images and facts) can be freely used under Attribution-ShareAlike license, unless stated otherwise. Cite this article:
Epiphyte Facts for Kids. Kiddle Encyclopedia.