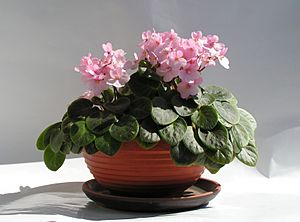 Saintpaulia is a commonly used as a decorative houseplant. 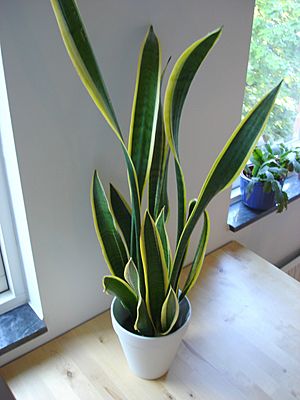 A houseplant is a plant that is grown indoors in places such as residences and offices. Houseplants are commonly grown for decorative purposes, but studies have also shown them to have positive psychological effects. Houseplants also help with indoor air purification. Plants used in this fashion are most commonly, though not always, tropical or semi-tropical epiphytes, succulents or cacti.

Major factors that should be considered when caring for houseplants are moisture, light, soil mixture, temperature, humidity, fertilizers, potting, and pest control. The following includes some general guidelines for houseplant care. For specific houseplant needs, the tags that sometimes come with plants are notoriously unhelpful and generic. Specific care information may be found widely online and in books. 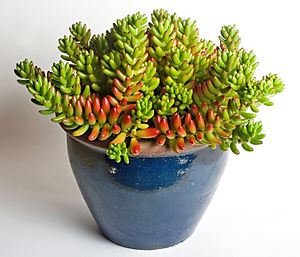 Succulents, or water-retaining plants, such as this jelly bean plant (Sedum rubrotinctum), are often grown as houseplants

Both under-watering and over-watering can be detrimental to a houseplant; the soil needs to be moist but not flooded. 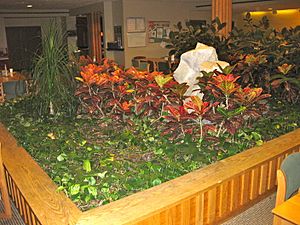 A skylight provides sun to these plants.

Different plants require different amounts of light, for different durations. Photoperiodism is a consideration, since some plants such as Poinsettia and Schlumbergera are influenced by either decreasing or increasing daylight hours. 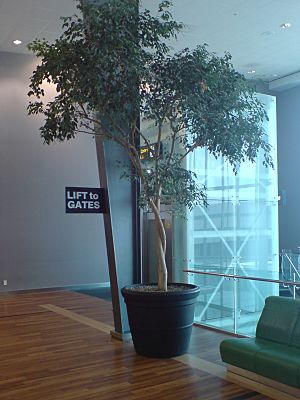 It is possible to supplement window light with artificial lighting of suitable wavelengths.

Houseplants are generally grown in specialized soils called potting compost or potting soil, not in local natural soil. A good potting compost mixture includes soil conditioners to provide the plant with nutrients, support, adequate drainage, and proper aeration. Most potting composts contain a combination of peat and vermiculite or perlite. Concern over environmental damage to peat bogs, however, is leading to the replacement of peat by coir (coconut fibre), which is a sustainable resource. Sterilised soil can also be used.

Most houseplants are tropical evergreen species that adapted to survive in a tropical climate which ranges from 15 °C to 25 °C (60 °F to 80 °F) year-round. This is similar to the temperature in most homes.

Humidity is slightly more difficult to control than temperature. However most species of houseplant will tolerate low humidity environments if it’s watered regularly. Homes are often around 20% to 60% relative humidity. Such a range is acceptable, although most species thrive near 80% relative humidity. To increase humidity one may mist plants with distilled water or use a humidifier.

Plants require soil minerals, mainly nitrate, phosphate, and potassium. Nitrogen is essential for green, leafy growth. Phosphorus is essential for flowering or fruiting plants. Potassium is essential for strong roots and increased nutrient uptake. Minor and trace elements, such as calcium, magnesium and iron, may also be necessary. 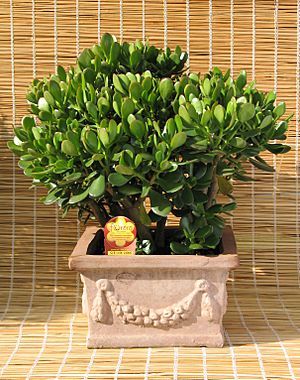 Proper pot size is an important factor to consider. A pot that is too large will cause root disease because of the excess moisture retained in the soil, while a pot that is too small will restrict a plant's growth. Generally, a plant can stay in the same pot for two or so years. Pots come in a variety of types as well, but usually can be broken down into two groups: porous and non-porous. Porous pots are usually clay and are highly recommended because they provide better aeration as air passes laterally through the sides of the pot. Non-porous pots such as glazed or plastic pots tend to hold moisture longer and restrict airflow. Another needed feature is drainage holes. Usually pots come with holes in the bottom to allow excess water to flow out of the soil which helps to prevent root rot. If a pot does not have drainage holes, it is best to double pot that plant so the inner pot can be lifted out and the excess water accumulated in the bottom of the outer pot can be removed. Soak old pots thoroughly in a solution of 1 part bleach to 10 parts water to kill any bacteria that may remain.

Indoor plants reduce components of indoor air pollution, particularly volatile organic compounds (VOC) such as benzene, toluene, and xylene. The compounds are removed primarily by soil microorganisms. Plants can also remove Carbon dioxide, which is correlated with lower work performance, from indoor areas. The effect has been investigated by NASA for use in spacecraft. Plants also appear to reduce airborne microbes and increase humidity.

Aside from traditional soil mixtures, media such as expanded clay may be employed in hydroponics, in which the plant is grown in a water and nutrient solution. This technique has a number of benefits, including an odorless, reusable, and more hygienic media. Any habitat for soil-bound pests is also eliminated, and the plant's water supply is less variable. However, some plants do not grow well with this technique, and media is often difficult to find in some parts of the world, such as North America, where hydroponics and specifically hydroculture is not as well-known or widespread.

Subirrigation offers another alternative to top-watering techniques. In this approach the plant is watered from the bottom of the pot. Water is transferred up into the potting media (be it soil or others) by capillary action. Advantages of this technique include controlled amounts of water, resulting in lower chances of overwatering if done correctly, no need to drain plants after watering unlike traditional top-water methods, and less compaction of the media due to the pressure put on the media from top-watering. 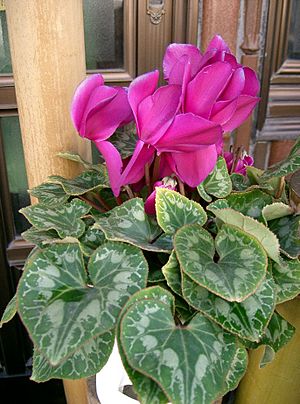 All content from Kiddle encyclopedia articles (including the article images and facts) can be freely used under Attribution-ShareAlike license, unless stated otherwise. Cite this article:
Houseplant Facts for Kids. Kiddle Encyclopedia.