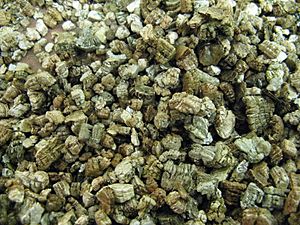 Vermiculite after heating and ready to use

Vermiculite is a phyllosilicate mineral that is dug out of the ground in China, South Africa, Russia and Brazil. When it is dug from the ground it is a hard rock. Vermiculite gets bigger when it is heated and changes into a material that looks like worms. This was first done in the United States of America in the year 1824.

When Vermiculite has changed into small grains it is a very good material for insulation and is used to stop the escape of heat in things like ovens, furnaces and houses in cold countries. It is also very good at holding water so it is used in the soil of plants in pots and helping to grow seeds.

Because the Vermiculite grains are spongy (they can be pressed flat and then they open again) but not hard they are used inside cases or boxes to protect articles from breakage when they are being transported.

Vermiculite is also used in hydroponics as a material for the roots of plants to hold on to.

Because it does not burn Vermiculite is used with other materials in fillings in walls or ceilings (the roof of a room) to stop the spread of fire.

Although vermiculite is not a form of asbestos, it is often contaminated with asbestos. Any vermiculite insulation found in a building should be treated as containing asbestos until confirmed otherwise by a laboratory.

All content from Kiddle encyclopedia articles (including the article images and facts) can be freely used under Attribution-ShareAlike license, unless stated otherwise. Cite this article:
Vermiculite Facts for Kids. Kiddle Encyclopedia.