Brazil (officially called Federative Republic of Brazil) is a country in South America. It is the world's fifth largest country. The country has about 209 million people. The capital of Brazil is Brasília. Brazil was named after brazilwood. Brazilwood is a tree that once grew very well along the Brazilian coast.

The first people to come to Brazil came around 9,000 B.C. That group of people is often called the South American Indians. They probably came from North America. Some of them were hunters and gatherers, but others were farmers.

Pedro Álvares Cabral was the first European to see Brazil. He saw it in 1500. He was from Portugal and the Portuguese government claimed Brazil. Soon, explorers explored the whole coastline of Brazil and colonies were set up. In the late 1500s and early 1600s the Dutch and the French would sometimes try to take land in Brazil. Brazilians started moving inland farther than the Treaty of Tordesillas said they could. This caused some fights with the Spaniards and native people in the area.

In 1822, Brazil claimed to be its own country and not a part of Portugal anymore. Soon there was civil war. But the emperor Pedro II improved the economy, and in 1888, he freed the slaves. In 1889, there was a military coup and Pedro II had to leave the country.

In 1889, Brazil became a republic. It was not very democratic, because the only people who could vote were people who owned land. There were some uprisings in the 1920s because some people thought the government was unfairly helping coffee growers. Brazil joined the Allies during World War II.

During the 1960s, the leader Castelo Branco made the government like a dictatorship. Since then, the country has become more democratic, but some people feel that there are still big problems in health and education.

In September 2016, then-president Dilma Rousseff was removed from office because of impeachment.

Most people in Brazil speak Portuguese. Brazil is the only country in Latin America that speaks Portuguese.

Some people in Brazil speak German dialects. That came from German immigrants. 0.8% of Brazilians speak German as their first language.

Other people in Brazil speak indigenous Brazilian languages, Italian, Japanese, French, or Spanish. Guaraní and Aymará are the first languages of a small number of Brazilians. 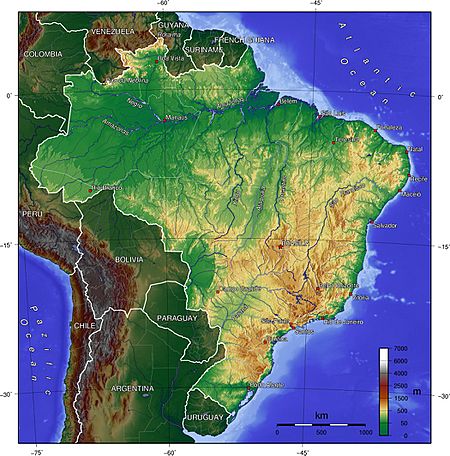 Brazil occupies a large area along the eastern coast of South America and includes much of the continent's interior, sharing land borders with Uruguay to the south; Argentina and Paraguay to the southwest; Bolivia and Peru to the west; Colombia to the northwest; and Venezuela, Guyana, Suriname and France (French overseas region of French Guiana) to the north. It shares a border with every South American country except Ecuador and Chile. It also encompasses a number of oceanic archipelagos, such as Fernando de Noronha, Rocas Atoll, Saint Peter and Paul Rocks, and Trindade and Martim Vaz. Its size, relief, climate, and natural resources make Brazil geographically diverse. Including its Atlantic islands, Brazil lies between latitudes 6°N and 34°S, and longitudes 28° and 74°W.

Brazil is the only country in the world that has the equator and the Tropic of Capricorn running through it. It is also the only country to have contiguous territory both inside and outside the tropics. Brazilian topography is also diverse and includes hills, mountains, plains, highlands, and scrublands. Much of the terrain lies between 200 metres (660 ft) and 800 metres (2,600 ft) in elevation. The main upland area occupies most of the southern half of the country. The northwestern parts of the plateau consist of broad, rolling terrain broken by low, rounded hills.

The southeastern section is more rugged, with a complex mass of ridges and mountain ranges reaching elevations of up to 1,200 metres (3,900 ft). These ranges include the Mantiqueira and Espinhaço mountains and the Serra do Mar. In the north, the Guiana Highlands form a major drainage divide, separating rivers that flow south into the Amazon Basin from rivers that empty into the Orinoco River system, in Venezuela, to the north. The highest point in Brazil is the Pico da Neblina at 2,994 metres (9,823 ft), and the lowest is the Atlantic Ocean.

Brazil has a dense and complex system of rivers, one of the world's most extensive, with eight major drainage basins, all of which drain into the Atlantic. Major rivers include the Amazon (the world's second-longest river and the largest in terms of volume of water), the Paraná and its major tributary the Iguaçu (which includes the Iguazu Falls), the Negro, São Francisco, Xingu, Madeira and Tapajós rivers. 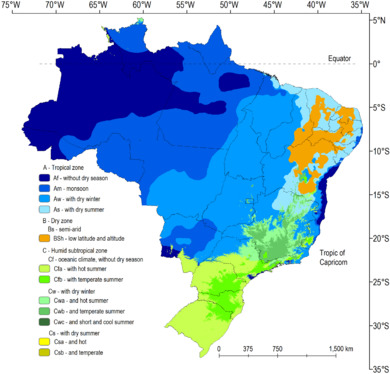 The climate of Brazil comprises a wide range of weather conditions across a large area and varied topography, but most of the country is tropical. According to the Köppen system, Brazil hosts six major climatic subtypes: desert, equatorial, tropical, semiarid, oceanic and subtropical. The different climatic conditions produce environments ranging from equatorial rainforests in the north and semiarid deserts in the northeast, to temperate coniferous forests in the south and tropical savannas in central Brazil. Many regions have starkly different microclimates.

An equatorial climate characterizes much of northern Brazil. There is no real dry season, but there are some variations in the period of the year when most rain falls. Temperatures average 25 °C (77 °F), with more significant temperature variation between night and day than between seasons.

Over central Brazil rainfall is more seasonal, characteristic of a savanna climate. This region is as extensive as the Amazon basin but has a very different climate as it lies farther south at a higher altitude. In the interior northeast, seasonal rainfall is even more extreme. The semiarid climatic region generally receives less than 800 millimetres (31.5 in) of rain, most of which generally falls in a period of three to five months of the year and occasionally less than this, creating long periods of drought. Brazil's 1877–78 Grande Seca (Great Drought), the worst in Brazil's history, caused approximately half a million deaths. A similarly devastating drought occurred in 1915.

South of Bahia, near the coasts, and more southerly most of the state of São Paulo, the distribution of rainfall changes, with rain falling throughout the year. The south enjoys subtropical conditions, with cool winters and average annual temperatures not exceeding 18 °C (64.4 °F); winter frosts and snowfall are not rare in the highest areas.

Brazil's large territory comprises different ecosystems, such as the Amazon rainforest, recognized as having the greatest biological diversity in the world, with the Atlantic Forest and the Cerrado, sustaining the greatest biodiversity. In the south, the Araucaria pine forest grows under temperate conditions. The rich wildlife of Brazil reflects the variety of natural habitats. Scientists estimate that the total number of plant and animal species in Brazil could approach four million, mostly invertebrates. 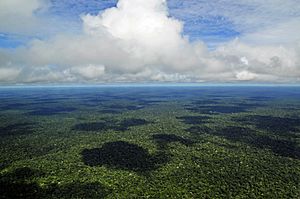 The Amazon rainforest, the richest and most biodiverse rainforest in the world.

Larger mammals include carnivores pumas, jaguars, ocelots, rare bush dogs, and foxes, and herbivores peccaries, tapirs, anteaters, sloths, opossums, and armadillos. Deer are plentiful in the south, and many species of New World monkeys are found in the northern rain forests. Concern for the environment has grown in response to global interest in environmental issues. Brazil's Amazon Basin is home to an extremely diverse array of fish species, including the red-bellied piranha. Despite its reputation as a ferocious freshwater fish, the red-bellied piranha is actually a generally timid scavenger. Biodiversity can contribute to agriculture, livestock, forestry and fisheries extraction. However, almost all economically exploited species of plants, such as soybeans and coffee, or animals, such as chickens, are imported from other countries, and the economic use of native species still crawls. In the Brazilian GDP, the forest sector represents just over 1% and fishing 0.4%.

The natural heritage of Brazil is severely threatened by cattle ranching and agriculture, logging, mining, resettlement, oil and gas extraction, over-fishing, wildlife trade, dams and infrastructure, water pollution, climate change, fire, and invasive species. In many areas of the country, the natural environment is threatened by development. Construction of highways has opened up previously remote areas for agriculture and settlement; dams have flooded valleys and inundated wildlife habitats; and mines have scarred and polluted the landscape. At least 70 dams are said to be planned for the Amazon region, including the controversial Belo Monte hydroelectric dam.

Quotes panel in the interior of B3, in São Paulo, one of the top 20 stock exchanges by market capitalization.

Brazil is the largest national economy in Latin America, the world's ninth largest economy and the eighth largest in purchasing power parity (PPP) according to 2018 estimates. Brazil has a mixed economy with abundant natural resources.

The country has been expanding its presence in international financial and commodities markets, and is one of a group of four emerging economies called the BRIC countries. Brazil has been the world's largest producer of coffee for the last 150 years. The country is a major exporter of soy, iron ore, pulp (cellulose), maize, beef, chicken meat, soybean meal, sugar, coffee, tobacco, cotton, orange juice, footwear, airplanes, cars, vehicle parts, gold, ethanol, semi-finished iron, among other products.

Sancho Bay, Fernando de Noronha, elected the most beautiful beach in the world by TripAdvisor.

The colonial city of Ouro Preto, a World Heritage Site, is one of the most popular destinations in Minas Gerais.

Tourism in Brazil is a growing sector and key to the economy of several regions of the country. In the list of world tourist destinations, in 2018, Brazil was the 48th most visited country, with 6.6 million tourists (and revenues of 5.9 billion dollars).

Natural areas are its most popular tourism product, a combination of ecotourism with leisure and recreation, mainly sun and beach, and adventure travel, as well as cultural tourism. Among the most popular destinations are the Amazon Rainforest, beaches and dunes in the Northeast Region, the Pantanal in the Center-West Region, beaches at Rio de Janeiro and Santa Catarina, cultural tourism in Minas Gerais and business trips to São Paulo.

Brazil is the largest country in South America. Its people are called Brazilians or Brasileiros(In Brazilian Portuguese). The people include people of Portuguese or other European descent who mainly live in the South, Africans, Native Americans and people of Mixed ancestry. Brazil also has the largest Japanese community outside Japan.

All content from Kiddle encyclopedia articles (including the article images and facts) can be freely used under Attribution-ShareAlike license, unless stated otherwise. Cite this article:
Brazil Facts for Kids. Kiddle Encyclopedia.