Autódromo José Carlos Pace, also known by its former name Interlagos, is a motor racing circuit. It is in the city of São Paulo. It is named after Carlos Pace. Pace was a Brazilian Formula One driver, who died in 1977. The track was renamed in his honor. It is well known for being the venue of the Formula One Brazilian Grand Prix. 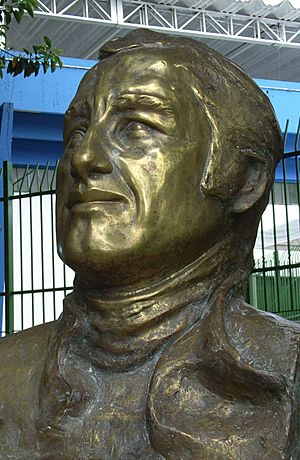 The bust of Pace in the circuit.

The land on which the circuit is built was originally bought in 1926 by property developers. They wanted to build a large suburban development. Following financial difficulties, partly due to the 1929 stock market crash, it was decided to built a racing circuit instead. Construction started in 1938 and the track was opened in May 1940.

The traditional name of the circuit, Interlagos, literally means "between lakes". It comes from the fact that it was built between two large artificial lakes, Guarapiranga and Billings. They were built in the early 20th century to supply the city with water and electric power. It was renamed in 1985 to its current name to honor the Brazilian Formula One driver José Carlos Pace, who died in a plane crash in 1977.

The facilities include a kart circuit named after Ayrton Senna.

The circuit is one of the few non-oval racing circuits to go in an anti-clockwise (counter-clockwise) direction. The present design of the track dates back to 1990. The FIA had placed new restrictions on track length. The original circuit was shortened from 7.829 km to only 4.397 km. The track lost three long straight sections and three fast curves. The direction on another curve was reversed and a new curve created. The original track had many fast corners that allowed cars to keep maximum speed for up to twenty seconds. This was considered very dangerous. The new track still has a very long high-speed section. That section contains bumps, high-speed turns and little run-off area, but the track is very wide at this point.

Another feature that makes Interlagos interesting is that it follows the ups and downs of hilly ground. This makes the circuit harder to drive and more demanding on the car's engine. The hilly course is also a good feature for cycling races held in the circuit.

The circuit is known for its bumpy surface. This can cause damage on an F1 car, which has a very low ride height. The races are also physically tough on the drivers. With more right turns, the drivers' necks are forced to move to the left. Since drivers turn left more often, the other side of their neck is usually stronger.

For the 2007 Brazilian Grand Prix, major repairs were made to the circuit. They were the largest set of repairs made in the last 35 years. The repairs were to fix the problems with the track surface. The existing asphalt surface was entirely replaced, resulting in a much smoother track surface. At the same time, the pit lane entrance was improve for safety. A new grandstand was built. For the work to be done, the circuit was closed. No events were held in the five months immediately preceding the race.

On 17 October 2007, Companhia Paulista de Trens Metropolitanos (CPTM) opened a new station of the Line C, Autódromo, near the racing circuit. The Line C had been extended to improve the access between the center of São Paulo and southern area of the Greater São Paulo including the circuit. This improved access to the circuit. 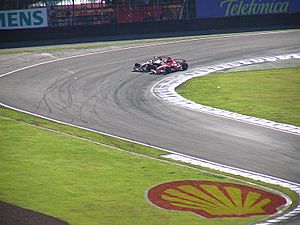 The first corner is the most popular overtaking spot. Michael Schumacher passes Kimi Räikkönen at the 2006 Brazilian Grand Prix.

The race start is in front of the "Tribunas" section and features a long straight section. Next comes "S do Senna" (Senna's S), a series of left, right, and left turns.

"S do Senna" connects with "Curva do Sol" (Sun Turn), a large-radius left-turn that leads to "Reta Oposta" (Opposite Straight). This refers to the unused back straight of the pre-1990 circuit. Next are two left hand, downhill turns that are called "Descida do Lago" (Lake Descent) and "Mergulho" (Dive). Then there is a short straight section that goes downhill.

After "Junção" there is a long, high-speed section. The is "Subida dos Boxes" (Up to the Pits), a long, left-hand uphill turn. At the end there are turns 14 and 15 that form what was once called "Cotovelo" (Elbow).

Interlagos has one of the longest pit-lanes ever used in Formula One. It starts just before the start-finish straight and rejoining the main course after Curva do Sol. Before 2007, the pits entrance was a difficult high-speed left turn. The pit lane entrance was changed to become safer for the 2007 Brazilian Grand Prix.

The fastest laps at the Autódromo José Carlos Pace.

All content from Kiddle encyclopedia articles (including the article images and facts) can be freely used under Attribution-ShareAlike license, unless stated otherwise. Cite this article:
Autódromo José Carlos Pace Facts for Kids. Kiddle Encyclopedia.