In auto racing he has been notable by winning in his first attempt the CART Championship title, Indianapolis 500, 24 Hours of Daytona, Grand Prix of Long Beach, Italian Grand Prix, NASCAR Rookie of the Year, and the crossover Race of Champions.

In October 2009, Montoya was ranked 30th on Times Online's list of the Top 50 Formula One drivers of all time. 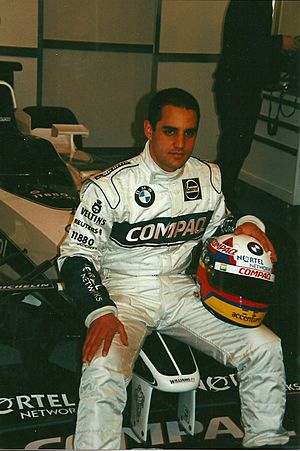 Montoya was born in Bogotá, Colombia, where he was taught the techniques of karting from an early age by his father Pablo, an architect and motorsport enthusiast.

Montoya moved to the Colombian Formula Renault Series in 1992. The same year he also participated in the U.S. Skip Barber driving school, and was hailed by driving instructors as being one of the best pupils to ever come through their school. 1993 saw Montoya switch to the Swift GTI Championship. In 1994, Montoya raced in three separate series: The Sudam 125 Karting, Barber Saab Pro Series and Formula N in Mexico.

He graduated from the Colegio San Tarsicio in Bogotá in the same year. Montoya developed into a strong qualifier, in some cases taking 80% of a season's pole positions. For the next three years Montoya raced in various divisions, continually progressing upward. He raced in the 1995 British Formula Vauxhall Championship and in 1996 raced in the British Formula 3 with Fortec Motorsport as well as taking part in events in Zandvoort, Netherlands and Silverstone.

Montoya got the opportunity to advance in his motor racing career when he was hired by the RSM Marko team to compete alongside Craig Lowndes in the 1997 International Formula 3000 season.

All content from Kiddle encyclopedia articles (including the article images and facts) can be freely used under Attribution-ShareAlike license, unless stated otherwise. Cite this article:
Juan Pablo Montoya Facts for Kids. Kiddle Encyclopedia.