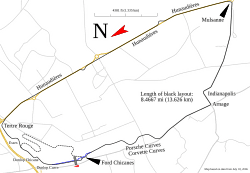 Map of track at 24 Hours of Le Mans

The 24 Hours of Le Mans is the world's oldest active sports car race in endurance racing. The race happens each year near the town of Le Mans, France. It was first run in 1923.

The cars must run for 24 hours without mechanical damage. It is important to manage the cars' consumables, mostly fuel, tires and braking materials. The driver goes over two hours behind the wheel before stopping in the pits. Then a relief driver takes over the driving duties. Drivers then eat and rest before returning to drive. Today it is a rule that three drivers share each car.

The race is held in June. This can lead to very hot conditions for the drivers. The race begins in mid-afternoon. The drivers race through the night and following morning. They then finish at the same time the race started, the following day.

All content from Kiddle encyclopedia articles (including the article images and facts) can be freely used under Attribution-ShareAlike license, unless stated otherwise. Cite this article:
24 Hours of Le Mans Facts for Kids. Kiddle Encyclopedia.