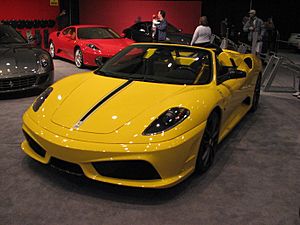 Ferrari has a rich racing history and is a well known premium car brand. The fastest street Ferrari is the F50 GT1, which can go over 370 kph (about 222 mph). The most powerful Ferrari is the FXX, which has about 800 horsepower. The FXX is a lighter, improved version of the F60 Enzo; it is Ferrari's most exclusive model, which you have to be chosen to own. It is basically a race car that you can buy from Ferrari. The car is so extreme (completely flat tires, low ride height, and no roadcar safety features such as Airbags) that it cannot be driven on roads legally. Ferrari will keep it for you at their Factory in Maranello in Italy. You can go to Italy and drive it on their private race track, or have it transported to another race track around the world, the same as if you were driving for a racing team. Thirty have been built and all but two were sold to customers for $2,500,000 each. Ferrari gave one to seven-time Formula 1 World Champion Michael Schumacer, who had driven for Ferrari for ten years when he retired in 2006, having brought Ferrari much success. Ferrari made his FXX different by painting it black. The other twenty-nine are either red or white, with stripes painted in the other colour. A Ferrari is one of the richest selling cars in the world.

All content from Kiddle encyclopedia articles (including the article images and facts) can be freely used under Attribution-ShareAlike license, unless stated otherwise. Cite this article:
Ferrari Facts for Kids. Kiddle Encyclopedia.