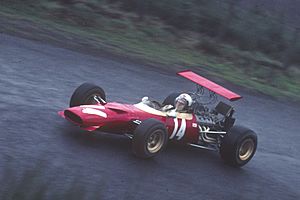 Formula Two, often called F2, is a type of open wheel auto racing. It served as a feeder series to Formula One. In 1985 it was replaced by Formula 3000. In 2008 the FIA announced that Formula Two would return for 2009 season in the form of the FIA Formula Two Championship. The goal is to develop a low-cost series to allow young drivers a chance to compete in the highest levels of motor racing.

Formula One is generally regarded as the top open-wheeled auto racing series. Because of the high performance and expense of the cars, a lower level racing series was needed for developing drivers and teams. For much of the history of F1, Formula Two was that step in the racing ladder.

Before the Second World War, there was a division of racing cars smaller and less powerful than the Grand Prix racers. This division was usually called voiturette ("small car") racing. It provided a place for amateur or less experienced drivers and smaller team to prove themselves. 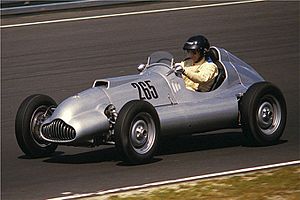 In 1946, Formula A (later known at Formula 1) was introduced. The old 1.5 L voiturette formula was replaced with 3.0 L supercharged cars.

Formula Two (first known as Formula B) was first formally defined in 1948 by the FIA as a smaller and cheaper racers to complement to the Grand Prix cars of the era.

The engines 2.0 L normally aspirated or 750 cc supercharged. The 750 cc engines were rarely used. This brought new manufactures, such as Cooper to move up to Formula Two. Formula One in its early years was very expensive. There were so few cars entered for the 1952 and 1953 that the World Championship Grand Prix races were run to Formula Two rules. 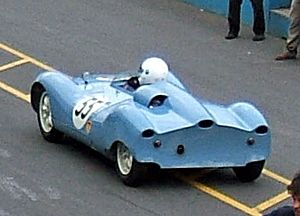 F2 started to decline with the arrival of the 2.5 L Formula One in 1954. A new format of Formula Two was introduced for 1957 with 1.5 L engines. This became dominated by rear-engined Coopers and Bobtail sports car. Porsches cars based on their RSK sports cars enjoying some success. Ferrari originally developed their 'Sharknose' Dino 156 as an F2 car. The dominant engine was the Coventry-Climax FPF four cylinder. 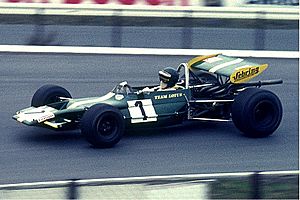 Jochen Rindt driving Lotus Formula 2 in 1970 at the Nürburgring

By the late 1960s, many felt the gap between F1 and F2 too wide. A new 1.6 L production-based engine formula for F2 was introduced. This brought the series back to a feeder series for F1. The most popular engine was the Cosworth FVA.

In 1972, the formula was changed to increase power. 2.0 L production-based engines were allowed. Cosworth BDs and BMW four-cylinder engines dominated the early years. BMW-powered Marches slowly gained the lead. For 1976, race only engines were permitted.

After the 1984 season, Formula Two was upgraded to Formula 3000. This was an attempt to merge F2-style chassis with the normally-aspirated 3000cc Cosworth DFV V8 engines. These engines were now obsolete in the all-turbocharged Formula One.

MotorSport Vision (MSV) won the contract to supply chassis and engines for the new FIA Formula Two Championship. MSV is also the promoter of the Championship as well as the operating entity for all of the cars.

The cars were designed by Williams Grand Prix Engineering Ltd and prepared by MotorSport Vision (MSV). The open wheel chassis is powered by a 1.8L turbocharged Audi engine developed by Mountune Racing. The new F2 cars are aimed to fall between F1 and F3 in performance. MSV, owned by former Formula One driver, Jonathan Palmer. The first championship was won by Andy Soucek. The season was marred by the death of Henry Surtees during Round 4 at Brands Hatch.

All content from Kiddle encyclopedia articles (including the article images and facts) can be freely used under Attribution-ShareAlike license, unless stated otherwise. Cite this article:
Formula Two Facts for Kids. Kiddle Encyclopedia.