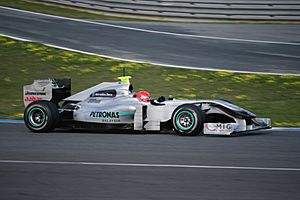 Open-wheel car describes cars with the wheels outside the car's main body and, in most cases, one seat. Other names include formula car, single-seater car in British English, or Indy car in the United States. Open-wheel cars are different from street cars, sports cars, stock cars, and touring cars. These car have their wheels below or inside the body or fenders. Open-wheel cars are usually built just for racing. Often, they have a higher amount of technological sophistication than in other forms of motor racing. 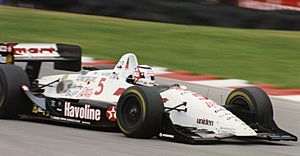 A typical open-wheeler has a small cockpit. It is only large enough for the driver's body. The head is exposed to the air. In modern cars the engine is often located directly behind the driver, and drives the rear wheels. Depending on the rules of the class, many types of open-wheelers have spoilers or wings. They are very low and have an almost flat bottom. These help add aerodynamic downforce. This pushes the car on to the road and makes it handle better. 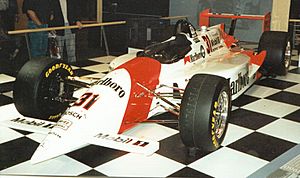 Some races, such as the Monaco Grand Prix are held on temporary street circuits. Most open-wheel races are on dedicated road courses, such as the Nürburgring in Germany. In the United States some top-level open wheel events are held on ovals, both short track and superspeedways. The most famous the annual Indianapolis 500 (Indy 500)

Driving an open-wheel car is very different from driving a car with fenders. Open-wheel vehicles, are light weight, have good aerodynamics, and powerful engines. Wheel-to-wheel contact is dangerous. If the forward edge of one tire contacts the rear of another tire, the vehicle my be flipped into the air and upside down.

All content from Kiddle encyclopedia articles (including the article images and facts) can be freely used under Attribution-ShareAlike license, unless stated otherwise. Cite this article:
Open wheel car Facts for Kids. Kiddle Encyclopedia.