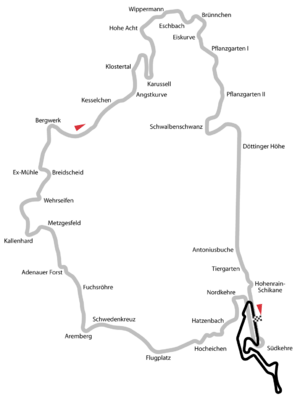 Detailed Nürburgring map showing both the Nordschleife and the new GP section.

The Nürburgring, known as simply "the Ring" by enthusiasts, is the name of a famous motorsport race track in Nürburg, Germany, built in the 1920s around the village and medieval castle of Nürburg in the Eifel, which is about 70 kilometres south of Cologne, 100 kilometres northwest of Mainz, and 120 kilometres northwest of Frankfurt. Originally, the track featured four track configurations: the 28.265 km (17.563 mi) long Gesamtstrecke ("Whole Course"), which included the 22.810 km Nordschleife ("Northern Loop"), and the 7.747 km Südschleife ("Southern Loop"). There also was a 2.281 km warm-up loop called Zielschleife ("Finish Loop") or better known as Betonschleife, around the pit area.

Between 1982 and 1983 the start-finish area was demolished to create a new GP-Strecke, and this is currently used for all major and international racing events.

All content from Kiddle encyclopedia articles (including the article images and facts) can be freely used under Attribution-ShareAlike license, unless stated otherwise. Cite this article:
Nürburgring Facts for Kids. Kiddle Encyclopedia.