Jacques Bernard "Jacky" Ickx (born 1 January 1945, in Brussels) is a Belgian former racing driver who won the 24 Hours of Le Mans six times, achieved eight wins and 25 podium finishes in Formula One, won the Can-Am Championship in 1979 and is a former winner of the Dakar Rally. 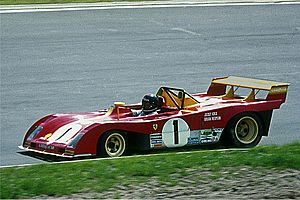 Jacky Ickx driving a Ferrari 312PB at the Nürburgring in 1973

Jacky Ickx was introduced to the sport when he was taken by his father, motoring journalist Jacques Ickx, to races which he covered. Despite this family background, Jacky had limited interest in the sport until his father bought him a 50 cc Zündapp motorcycle. Soon afterwards, Ickx won 8 of 13 races at the first season and the European 50 cc trials title. He took another two titles before he moved to racing a Lotus Cortina in touring car racing, taking his national saloon car championship in 1965, as well as winning the Spa 24 Hours race in 1966 driving a BMW 2000TI. He also competed in sports car races where he had already significant experience from taking part in the 1000 km races at the Nürburgring.

Jacky Ickx is married to singer Khadja Nin. Ickx's father Jacques Ickx and older brother Pascal Ickx were racing drivers. His daughter, Vanina Ickx (from his first marriage with Catherine Ickx) followed in her father's footsteps to become a racing driver as well.

All content from Kiddle encyclopedia articles (including the article images and facts) can be freely used under Attribution-ShareAlike license, unless stated otherwise. Cite this article:
Jacky Ickx Facts for Kids. Kiddle Encyclopedia.