Motorsports Hall of Fame of America facts for kids

Coordinates: 29°11′8″N 81°4′10″W﻿ / ﻿29.18556°N 81.06944°W﻿ / 29.18556; -81.06944 The Motorsports Hall of Fame of America (MSHFA) is hall of fame that honors motorsports competitors and contributors from the United States from all disciplines, with categories for Open Wheel, Stock Cars, Powerboats, Drag Racing, Motorcycles, Sports Cars, Aviation, At Large and Historic. Periodic recognition is given to specialty categories including Off Road, Speed Records, Business and Technology. Its annual Induction Ceremony is attended by notables throughout the motorsports community and is reported on widely.

The MSHFA was incorporated in 1986 as an IRS 501(c)(3) nonprofit organization by civic leaders of the City of Novi, Michigan, led by Founding Chairman Larry G. Ciancio. Its inaugural Induction Ceremony was held in 1989. Ron Watson was its founding President and continued to serve in that capacity until his untimely death in October 2019. He was succeeded as president at his request by noted motorsports author and historian and longtime MSHFA board member George Levy.

The mission of the MSHFA is to “further the American core values of leadership, creativity, originality, teamwork and spirit of competition embodied in motorsports.” The MSHFA is operated by the nonprofit Motorsports Museum and Hall of Fame of America Foundation Inc.

Eligibility for induction is extended to "any person who has driven, piloted, owned, designed, built, supported, maintained, prepared or promoted motorized vehicles in pursuit of speed, distance or other records." An inductee must either be retired for at least three years, or engaged in the top level for their area of motorsports for at least 20 years. Induction is limited to United States citizens, or non-citizens who have recorded significant motorsports achievements in the U.S.

Induction is decided by a straight vote among 200 racing experts: historians, experienced journalists, category experts and existing inductees. The voting process is overseen by certified accountants.

Every year there are two rounds of voting. The first is conducted among a 100-voter nominating committee to determine the six finalists in each category. The second, open to all 200 voters, decides that year's inductee in each category. Each inductee receives the Hall of Fame's prestigious “Horsepower” award — an original bronze statuette by renowned Ann Arbor, Michigan sculptor Michael Curtis. Curtis sculptures have been presented both to and by United States Presidents .

The two-day induction experience includes several other events as well, including the Heroes of Horsepower reception held in the MSHFA museum the night before the black-tie ceremony at which the new inductees unveil their permanent Hall of Fame sculptures. Additionally, the Heritage Luncheon spotlights the induction of the honorees in the Historic category. The Inductee Breakfast allows the incoming class and returning Hall of Famers to open up in a lively Q&A session. Admission to all events event is open to the public via tickets purchased in advance. 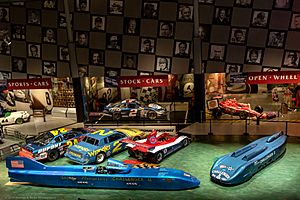 The Motorsports Hall of Fame of America museum on the grounds of Daytona International Speedway showcases vehicles and memorabilia from all forms of motorsports and attracts more than 100,000 visitors per year.

The Motorsports Hall of Fame of America museum on the grounds of Daytona International Speedway welcomes more than 100,000 visitors per year. The museum was originally located in Novi, MI, birthplace of the famous Novi Special Indianapolis 500 racecars. It later moved to the Detroit Science Center before relocating to Daytona Beach. The museum is housed within the Ticket and Tours Building at Daytona International Speedway. Admission is open daily as part of regular speedway tours.

On display are vehicles and artifacts related to the Hall of Fame's inductees and achievements. Examples include historic racing vehicles, memorabilia, informational displays and plaques honoring the MSHFA's more than 260 inductees. There are also two movie theaters featuring motorsports content.

+ Person inducted under special rule. Usually, an inductee must have been retired for at least three years in their field. However, inductees may also have been engaged at the top level of his or her area of motorsports for at least 20 years, and if that is the case, the retirement rule is waived.

All content from Kiddle encyclopedia articles (including the article images and facts) can be freely used under Attribution-ShareAlike license, unless stated otherwise. Cite this article:
Motorsports Hall of Fame of America Facts for Kids. Kiddle Encyclopedia.