Paul Leonard Newman (January 26, 1925 – September 26, 2008) was an American actor, film director, producer, race car driver, IndyCar owner, entrepreneur, and philanthropist. He won and was nominated for numerous awards, winning an Oscar for his performance in the 1986 film The Color of Money, a BAFTA Award, a Screen Actors Guild Award, a Cannes Film Festival Award, an Emmy Award, and many others. Newman's other roles include the title characters in The Hustler (1961), Hud (1963), Harper (1966) and Cool Hand Luke (1967), as well as Butch Cassidy and the Sundance Kid (1969), The Life and Times of Judge Roy Bean (1972), The Sting (1973), Slap Shot (1977), and The Verdict (1982). He voiced Doc Hudson in the first installment of Disney-Pixar's Cars as his final acting performance, with voice recordings being used in Cars 3 (2017).

Newman won several national championships as a driver in Sports Car Club of America road racing, and his race teams won several championships in open-wheel IndyCar racing. He was a co-founder of Newman's Own, a food company from which he donated all post-tax profits and royalties to charity. As of November 2018, these donations have totaled over US$535 million. He was a co-founder of Safe Water Network, a nonprofit that develops sustainable drinking water solutions for those in need.

In 1988, Newman founded the SeriousFun Children's Network, a global family of summer camps and programs for children with serious illness which has served 290,076 children since its inception. 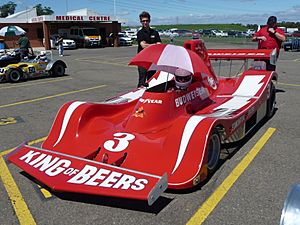 Newman was an auto racing enthusiast, and first became interested in motorsports ("the first thing that I ever found I had any grace in") while training at the Watkins Glen Racing School for the filming of Winning, a 1969 film. Because of his love and passion for racing, Newman agreed in 1971 to star in and to host his first television special, Once Upon a Wheel, on the history of auto racing. It was produced and directed by David Winters, who co-owned a number of racing cars with Newman. Newman's first professional event as a racer was in 1972 at Thompson International Speedway, quietly entered as "P. L. Newman", by which he continued to be known in the racing community.

He was a frequent competitor in Sports Car Club of America (SCCA) events for the rest of the decade, eventually winning four national championships. He later drove in the 1979 24 Hours of Le Mans in Dick Barbour's Porsche 935 and finished in second place. Newman reunited with Barbour in 2000 to compete in the Petit Le Mans.

From the mid-1970s to the early 1990s, he drove for the Bob Sharp Racing team, racing mainly Datsuns (later rebranded as Nissans) in the Trans-Am Series. He became closely associated with the brand during the 1980s, even appearing in commercials for them in Japan and having a special edition of the Nissan Skyline named after him. At the age of 70 years and eight days, Newman became the oldest driver to date to be part of a winning team in a major sanctioned race, winning in his class at the 1995 24 Hours of Daytona. Among his last major races were the Baja 1000 in 2004 and the 24 Hours of Daytona once again in 2005. 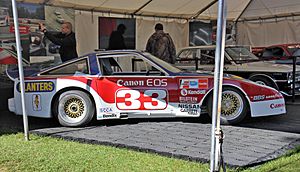 During the 1976 auto racing season, Newman became interested in forming a professional auto racing team and contacted Bill Freeman who introduced Newman to professional auto racing management, and their company specialized in Can-Am, Indy Cars, and other high-performance racing automobiles. The team was based in Santa Barbara, California and commuted to Willow Springs International Motorsports Park for much of its testing sessions.

Their Newman Freeman Racing team was very competitive in the North American Can-Am series in their Budweiser sponsored Chevrolet-powered Spyder NFs. Newman and Freeman began a long and successful partnership with the Newman Freeman Racing team in the Can-Am series which culminated in the Can-Am Team Championship trophy in 1979. Newman was associated with Freeman's established Porsche racing team which allowed both Newman and Freeman to compete in SCCA and IMSA racing events together, including the Sebring 12-hour endurance sports car race. This car was sponsored by Beverly Porsche/Audi. Freeman was Sports Car Club of America's Southern Pacific National Champion during the Newman Freeman Racing period. Later Newman co-founded Newman/Haas Racing with Carl Haas, a Champ Car team, in 1983, going on to win eight drivers' championships under his ownership. The 1996 racing season was chronicled in the IMAX film Super Speedway (1997), which Newman narrated. He was a partner in the Atlantic Championship team Newman Wachs Racing. Newman voiced Doc Hudson in Cars (2006).

Having said he would quit "when I embarrass myself", Newman competed into his 80s, winning at Lime Rock in what former co-driver Sam Posey called a "brutish Corvette" displaying his age as its number: 81. He took the pole in his last professional race, in 2007 at Watkins Glen International, and in a 2008 run at Lime Rock, arranged by friends, he reportedly still did 9/10ths of his best time.

Newman was posthumously inducted into the SCCA Hall of Fame at the national convention in Las Vegas, Nevada on February 21, 2009.

Newman's racing life was chronicled in the documentary Winning: The Racing Life of Paul Newman (2015).

He came out of retirement to narrate the 2007 documentary movie Dale, about the life of NASCAR driver Dale Earnhardt. He also narrated the 2008 BBC documentary Meerkats: The Movie. It was recorded at a studio near his home shortly before his death. The Meerkats was the last movie credit of Newman's long career.

Newman was married twice. His first marriage was to Jackie Witte from 1949 to 1958. They had a son, Scott (1950–1978), and two daughters, Susan (born 1953) and Stephanie Kendall (born 1954). Scott, who appeared in films including Breakheart Pass, The Towering Inferno, and the 1977 film Fraternity Row, died in November 1978 from a drug overdose. Newman started the Scott Newman Center for drug abuse prevention in memory of his son. Susan is a documentary filmmaker and philanthropist, and has Broadway and screen credits, including a starring role as one of four Beatles fans in I Wanna Hold Your Hand (1978), and also a small role opposite her father in Slap Shot. She also received an Emmy nomination as co-producer of his telefilm, The Shadow Box.

Newman met actress Joanne Woodward in 1953, on the production of Picnic on Broadway. It was Newman's debut; Woodward was an understudy. Shortly after filming The Long, Hot Summer in 1957, he divorced Witte to marry Woodward. They married early in 1958. The Newmans moved to 11th Street in Manhattan, before buying a home and starting a family in Westport, Connecticut. They were one of the very first Hollywood movie star couples to choose to raise their families outside California. They remained married for 50 years, until his death in 2008. They had three daughters: Elinor "Nell" Teresa (b. 1959), Melissa "Lissy" Stewart (b. 1961), and Claire "Clea" Olivia (b. 1965).

Newman was well known for his devotion to his wife and family. When once asked about his reputation for fidelity, he famously quipped, "Why go out for a hamburger when you have steak at home?" He also said that he never met anyone who had as much to lose as he did. In his profile on 60 Minutes, he admitted he once left Woodward after a fight, walked around the outside of the house, knocked on the front door and explained to Joanne he had nowhere to go. Newman directed Nell alongside her mother in the films Rachel, Rachel and The Effect of Gamma Rays on Man-in-the-Moon Marigolds.

Newman was an ordained minister of the Universal Life Church.

All content from Kiddle encyclopedia articles (including the article images and facts) can be freely used under Attribution-ShareAlike license, unless stated otherwise. Cite this article:
Paul Newman Facts for Kids. Kiddle Encyclopedia.