Cleveland Heights is a city in Cuyahoga County, Ohio, United States, and one of Cleveland's historical streetcar suburbs. The city's population was 45,312 at the 2020 census. As of the 2010 census, Cleveland Heights was ranked the 8th largest city by population in the Greater Cleveland area and ranked 20th in Ohio. It was founded as a village in 1903 and a city in 1921.

The area that is now Cleveland Heights was settled later than most of Cuyahoga County. The first road through what is today the city, Mayfield Road, was not built until 1828. Besides farms the area also had quarries in the 19th century. One of the early quarries was established by Duncan McFarland and mined bluestone. This led to the settlement that grew up around the quarry for the workers to live in to be referred to as Bluestone. There is still a road of this name in that area.

Rockefeller was not the only affluent Clevelander to come to what is now Cleveland Heights. The Euclid Heights development was created by Patrick Calhoun starting in 1892. It was centered around the Euclid Golf Course and began at the Cleveland city line, covering the area between Mayfield Road and Cedar Road as far east as Coventry Road. There was a streetcar line from this location running to the center of Cleveland's business district.

In 1898 Marcus M. Brown began the development of Mayfield Heights along the south side of Mayfield Road just beyond the Cleveland boundary and to take advantage of the Mayfield Road streetcar. Brown had purchased this land from Emil Preyer and his sister Mary Preyer Hellwig. Emil had operated a cedar mill. 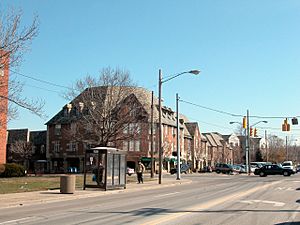 View of the Heights Rockefeller Building, from Mayfield and Lee Roads

All content from Kiddle encyclopedia articles (including the article images and facts) can be freely used under Attribution-ShareAlike license, unless stated otherwise. Cite this article:
Cleveland Heights, Ohio Facts for Kids. Kiddle Encyclopedia.