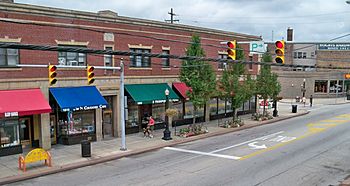 Coventry Village is a commercial business district in Cleveland Heights, Ohio, situated on Coventry Road between Mayfield Road (U.S. Route 322) and Euclid Heights Boulevard. Coventry is associated with Northeast Ohio's artistic, musical, bohemian, hippie and emerging hipster communities and is the center of Cleveland's creative class, inviting comparisons to the Haight-Ashbury district in San Francisco and Greenwich Village in New York City, although on a smaller scale.

The road bisecting what is now Coventry Village appeared in the Titus Atlas of 1874 as an unidentified north-south route. It was the eastern terminus of Cedar Road in the rural area then known as East Cleveland Township, separating it from Warrensville Township to the east. The road passed through farmland owned by Worthy S. Streator located between Mayfield Road and Cedar Road. By 1890 it was known as the North-South County Road, or Streator Road. That year, Patrick Calhoun, a lawyer visiting town on railroad business, spied the James A. Garfield Memorial in Lake View Cemetery from a bluff on Streator's farm. He immediately offered to purchase Streator's acreage surrounding Streator Road for $30,000, closing the purchase in 1891. Calhoun intended to develop acreage as part of an upscale planned community that he named "Euclid Heights". Calhoun intended Euclid Heights to be a New England-style upper-income community of Protestants of Anglo-Saxon heritage. By 1892 the road was identified as Coventry Road in George F. Cram & Company's atlas of that year. The part of East Cleveland Township now known as Cleveland Heights became a hamlet in 1901, and then a village in 1903.

As demand for large houses declined in the coming decades, and Calhoun's realty company became insolvent in the 1910s, unbuilt lots in the portion of Euclid Heights near Coventry Road were sold at foreclosure sales. Developers built apartment buildings on these empty lots.

The Euclid Heights and Mayfield streetcar routes met at the Coventry–Mayfield intersection, making the area a convenient commuter transfer point after 1907. Most of the buildings on Coventry were constructed between 1913 and 1933, with the greatest growth occurring between 1921 and 1925, when 18 commercial buildings were erected. Buildings erected for retail walk-in traffic typically included second story apartments, to maximize the benefits of urbanization and rapid population growth. The new Coventry business district served streetcar passengers and the increasing populations of the Euclid Heights and Mayfield Heights developments. Before then, the nearest commercial center was at Doan's Corners.

By the early 1920s, the newly built apartment district attracted a large, thriving Jewish community. This influence was reflected in the commercial district by, among other things, a kosher poultry slaughterhouse. In 1921, Cleveland Heights attained cityhood.

In the second half of the 1960s, Coventry became the gathering place for Cleveland's counterculture, owing partly to the popularity of the C-Saw Café with bikers, and to the area's proximity to John Carroll University and the predecessor schools to Case Western Reserve University and Cleveland State University.

Record Revolution, which opened in 1968 and continues to operate, became a destination for rock stars passing through Cleveland, and most of its famous customers autographed the store walls. Among them were members of Led Zeppelin, Genesis, Bad Company, The Who, Mott the Hoople, Bruce Springsteen, Southside Johnny, Hall & Oates, Brian Eno, the Psychedelic Furs, Deborah Harry of Blondie, and the Pixies. The staff hosted in-store album signings with then-breaking artists Lou Reed, Patti Smith, and Elvis Costello. In his book The Catalog of Cool (1982), rock critic Gene Sculatti called Record Revolution “the coolest place to buy records” in Ohio. In the 1970s, Record Revolution was one of the three "breakout" record stores in Greater Cleveland that affected radio play at the influential rock station WMMS. When WMMS management added to its playlist a new album or a new artist, particularly one on the cutting edge or left of center, an early indicator of success was sales at Record Revolution. To stay competitive, Record Revolution expanded its business model to retailing of clothing and paraphernalia euphemistically called "smoking accessories". 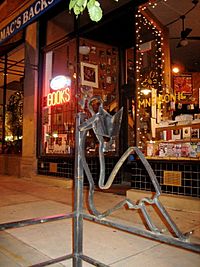 All content from Kiddle encyclopedia articles (including the article images and facts) can be freely used under Attribution-ShareAlike license, unless stated otherwise. Cite this article:
Coventry Village Facts for Kids. Kiddle Encyclopedia.