Cuyahoga County ( or) is located in the northeastern part of the U.S. state of Ohio on the southern shore of Lake Erie, across the U.S.-Canada maritime border. As of the 2020 United States Census, its population was 1,264,817, making it the second-most-populous county in the state.

The county seat and largest city is Cleveland. The county is bisected by the Cuyahoga River, which gave the county its name. “Cuyahoga” is an Iroquoian word meaning "crooked river". Cuyahoga County is the core of the Greater Cleveland Metropolitan Area and of the Cleveland–Akron–Canton combined statistical area.

Former U.S. President James A. Garfield was born in what was at the time Cuyahoga County's Orange Township. 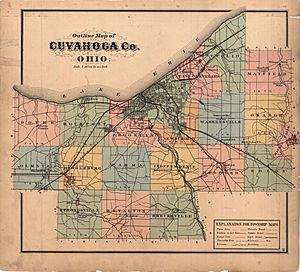 After the discovery of the New World, the land that became Cuyahoga County was originally part of the French colony of Canada (New France), which was ceded in 1763 to Great Britain and renamed Province of Quebec. In the late 18th century the land became part of the Connecticut Western Reserve in the Northwest Territory, then was purchased by the Connecticut Land Company in 1795.

Cuyahoga County was created on June 7, 1807 and organized on May 1, 1810. It was later reduced by the creation of Huron, Lake, and Lorain Counties. It was named after the Cuyahoga River. 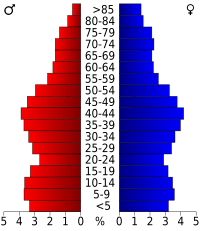 Cuyahoga County is served by international, regional and county airports, including:

Cuyahoga County receives intercity passenger service by Amtrak by way of Lakefront Station in Cleveland, with destinations such as Chicago, New York, Boston, Washington, DC and many more.

Greyhound, Baron's Bus Lines and Megabus all provide public transportation beyond Cuyahoga County to destinations across the United States.

Cuyahoga County is served by the Cleveland Metroparks system. Its 16 reservations provide more than 21,000 acres (8,500 ha) of green space and recreational amenities. The county is home to part of Cuyahoga Valley National Park, which extends southward into Summit County.

Cuyahoga County has many options for shopping. Some of the well known shopping areas include: 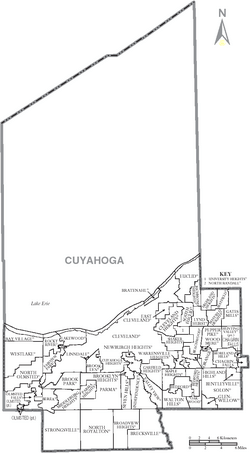 Map of Cuyahoga County, Ohio with Municipal and Township Labels

Cuyahoga County is home to a number of higher-education institutions, including:

All content from Kiddle encyclopedia articles (including the article images and facts) can be freely used under Attribution-ShareAlike license, unless stated otherwise. Cite this article:
Cuyahoga County, Ohio Facts for Kids. Kiddle Encyclopedia.