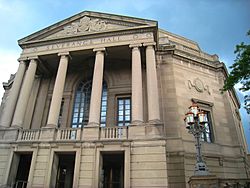 Severance Hall, the home of the Cleveland Orchestra

The Cleveland Orchestra, based in Cleveland, is one of the five American orchestras informally referred to as the "Big Five". Founded in 1918 by the pianist and impresario Adella Prentiss Hughes, the orchestra plays most of its concerts at Severance Hall. As of 2017, the incumbent music director is Franz Welser-Möst.

In 2012 Gramophone Magazine ranked the Cleveland Orchestra number 7 on its list of 20 of the world's greatest orchestras.

George Szell's long reign as Music Director has been largely credited for the orchestra's rise to eminence. He reformed the orchestra in the late-1940s, firing a dozen musicians in the process with a dozen more leaving of their own volition. Szell is also credited with giving the orchestra its distinct, European sound. He pushed an ambitious recording schedule with the orchestra, bringing its music to millions worldwide. Szell's influence has continued, even decades after his death.

Today's conductor of the Cleveland Orchestra, Franz Welser-Möst, continues to conduct the orchestra in Cleveland as well as touring with them all over the world. They perform regularly in the summer at the Blossom Festival in Cuyahoga Falls, Ohio, and also in Miami, Florida, and in the Musikverein, Vienna. 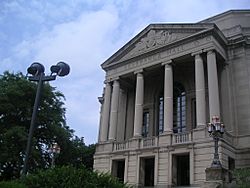 All content from Kiddle encyclopedia articles (including the article images and facts) can be freely used under Attribution-ShareAlike license, unless stated otherwise. Cite this article:
Cleveland Orchestra Facts for Kids. Kiddle Encyclopedia.