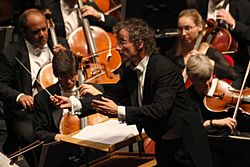 Franz Welser-Möst (born Linz, 16 August 1960) is an Austrian conductor. He is the conductor (music director) of the Cleveland Orchestra.

Franz Leopold Maria Möst was born in Linz, Austria. He learned to play the violin, but after being injured in a car accident he changed to conducting.

In 1995 he went to the Zurich Opera House where he conducted many operas including complete cycles of Wagner's Ring Cycle. He left the Zurich post in 2008.

Since 2002 Welser-Möst has been conductor of the Cleveland Orchestra.

In 2007, the Austrian government made him Musical Director (Generalmusikdirektor) of the Vienna State Opera beginning in September 2010.

He has made many recordings.

All content from Kiddle encyclopedia articles (including the article images and facts) can be freely used under Attribution-ShareAlike license, unless stated otherwise. Cite this article:
Franz Welser-Möst Facts for Kids. Kiddle Encyclopedia.