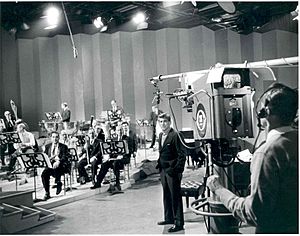 Leonard Bernstein with members of the Philharmonic rehearsing for a television broadcast, circa 1958. Bert Bial, New York Philharmonic Archives

The New York Philharmonic is the oldest symphony orchestra in the United States. It performs most of its concerts at the Avery Fisher Hall in New York.

The orchestra started in 1842. At that time it was called the Philharmonic Society. At its first concert the orchestra played a very long programme which included Beethoven’s Symphony No. 5 conducted by Ureli Corelli Hill. The musicians worked as a cooperative or "communistic" society. This meant that the musicians themselves made up the rules about how the orchestra should be run: who would become a member, which music would be performed, and who would conduct. At the end of each season they divided any money the orchestra had earned amongst themselves.

The orchestra were a great success, but they needed a new concert hall. They gave a fund-raising concert which included Beethoven's Symphony No. 9. It was the first time it had ever been played in America. The concert took place in Castle Garden on the southern tip of Manhattan. There were about 400 performers in the orchestra and choir. The words that the choir sings were translated into English. It was the first time this work had been sung in English anywhere in the world. However, the tickets cost a lot of money: US$2.00 each, so not so many people came. It was some time before the orchestra got their concert hall. Many people thought Beethoven's 9th symphony was a strange piece of music because the choir only sing in the last movement which is called "Ode to Joy". In 1865 Theodore Eisfeld conducted the Orchestra’s memorial concert for the recently assassinated Abraham Lincoln, but the last movement was not performed because it was thought that the "Ode to Joy" was not suitable for the sad occasion.

Competition from another orchestra, 1878

Leopold Damrosch, who had been Franz Liszt's concertmaster at Weimar, was the orchestra’s conductor for the 1876-1877 season. But the public did not like him, so he started his own orchestra: the Symphony Society of New York. When he died in 1885, his 23-year-old son Walter Johannes Damrosch took over and continued the competition with the old Philharmonic. It was Walter who would make the rich Scotsman Andrew Carnegie realize that New York needed a really good concert hall and on May 5, 1891 both Walter and the Russian composer Tchaikovsky conducted at the first concert of the city's new Music Hall. A few years later this new hall was renamed Carnegie Hall after the man who gave the money for it to be built.

Theodore Thomas began conducting the Philharmonic in 1877 and made it a very good orchestra. In 1891 Thomas left New York to found the Chicago Symphony Orchestra.

Anton Seidl conducted the orchestra until 1898. Seidl had worked as Wagner's assistant and was famous for conducting Wagner’s music. He gave the first performance of Antonín Dvořák's Ninth Symphony "From the New World." Many people were sad when Seidl suddenly died in 1898 from food poisoning at the age of 47. Twelve thousand people applied for tickets to his funeral at the Metropolitan Opera House at 39th Street and Broadway and the streets were jammed with people and traffic.

In 1909 the orchestra was organized differently. Instead of a cooperative, they were run by a small group of people called guarantors. They persuaded Gustav Mahler to be principal conductor. Instead of 18 concerts a season they gave 54, which included a tour of New England. Mahler was used to conducting opera, but now he could conduct symphonies, and he introduced audiences to his own compositions. During his time the orchestra were given regular salaries for the first time.

Between 1911 and 1920, the Philharmonic's conductor was Josef Stransky, who led every single one of the orchestra's concerts during this period.

When the Philharmonic joined together with the National Symphony in 1921, they had the Dutch conductor Willem Mengelberg. He stayed there for nine years, although other conductors, including Bruno Walter, Wilhelm Furtwängler, Igor Stravinsky, and Arturo Toscanini, led about half the concerts. They started to have an outdoor symphony series, playing low-priced summer concerts at Lewisohn Stadium in upper Manhattan. In 1920 the orchestra hired Henry Hadley as "associate conductor" to perform concerts which included works by American composers.

In 1924, the Young People's Concerts were started, and soon grew to 15 concerts per season by the end of the 1920s. They started to make recordings. In 1928 they joined together with another orchestra, the New York Symphony Society. Toscanini conducted the newly organized orchestra, and continued until 1936.

The English conductor John Barbirolli and the Pole Artur Rodzinski, were joint replacements for Toscanini in 1936. The next year Barbirolli was made the main conductor, a post he held until the spring of 1941. In 1943, Rodzinski became conductor. He had also been conducting on the Sunday afternoon radio broadcast when CBS listeners around the country heard the announcer break in on Arthur Rubinstein's performance of Brahms's Second Piano Concerto to tell them about the attack on Pearl Harbor.

Artur Rodzinski, Bruno Walter, and Sir Thomas Beecham made a series of recordings with the Philharmonic for Columbia Records during the 1940s.

Leopold Stokowski and Dimitri Mitropoulos were the orchestra’s two conductors in 1949, with Mitropoulos becoming conductor in 1951. Mitropoulos often conducted new music and music that was not well known. In 1957, Mitropoulos and Leonard Bernstein served together as Principal Conductors until, in the course of the season, Bernstein was made conductor, becoming the first American-born-and-trained conductor of the Philharmonic.

Leonard Bernstein was Music Director for 11 seasons. Many new things happened during this time. Two television series were started on CBS: the Young People's Concerts and "Leonard Bernstein and the New York Philharmonic." The first of these started in 1958. It was a new idea and it won every award for educational television. Bernstein continued the orchestra's recordings with Columbia Records until he retired as music director in 1969. He got lots of composers, especially American composers such as Aaron Copland, to write new works for the orchestra.

In 1971 Pierre Boulez became the first Frenchman to have the job of conductor of the Philharmonic. Boulez had new ideas about music to be performed. He was a composer himself and often performed modern music.

Zubin Mehta became conductor in 1978. He, too, conducted a lot of new music.

Kurt Masur, who had often been conducting the Philharmonic since 1981, became conductor in 1991. During his time he included a series of free Memorial Day Concerts at the Cathedral of St. John the Divine and annual concert tours abroad that included the orchestra's first trip to mainland China. His stayed until 2002, and was then given the honorary title “Music Director Emeritus of the Philharmonic”.

On 26 February 2008 the Philharmonic gave a concert in Pyongyang in North Korea. It was the first time since the end of the Korean War in 1953 that there had been an important cultural visit from the United States to North Korea. 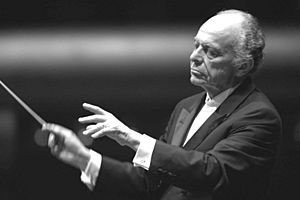 In September 2002, 60 years after conducting the Orchestra at the age of twelve at Lewisohn Stadium, Lorin Maazel became conductor of the Philharmonic. In his first subscription week he conducted the first ever performance of John Adams' On the Transmigration of Souls. This work had been composed in memory of those who lost their lives on September 11, 2001. He performed new music as well as music of the well-known composers. He will stay with the orchestra until the end of the 2008-2009 season.

All content from Kiddle encyclopedia articles (including the article images and facts) can be freely used under Attribution-ShareAlike license, unless stated otherwise. Cite this article:
New York Philharmonic Facts for Kids. Kiddle Encyclopedia.