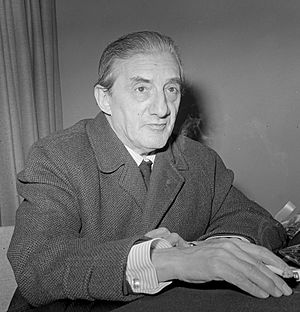 Sir John Barbirolli, CH (2 December 1899 – 29 July 1970), né Giovanni Battista Barbirolli, was a British conductor and cellist. He is remembered above all as conductor of the Hallé Orchestra in Manchester and conducted for the rest of his life.

Barbirolli is remembered for his great interpretations of Romantic music and of early 20th century English music. He was knighted in 1949 and made a Companion of Honour in 1969.

Born in London of Italian and French parentage, Barbirolli grew up in a family of professional musicians. After starting out as a cellist, he was given the chance to conduct, from 1926 with the British National Opera Company, and then with Covent Garden's touring company. Late in his career he made several recordings of operas, of which his 1967 set of Puccini's Madama Butterfly for EMI is probably the best known.

Both in the concert hall and on record, Barbirolli was particularly associated with the music of English composers such as Elgar, Delius and Vaughan Williams. His interpretations of other late romantic composers, such as Mahler and Sibelius, as well as of earlier classical composers, including Schubert, are also still admired.

All content from Kiddle encyclopedia articles (including the article images and facts) can be freely used under Attribution-ShareAlike license, unless stated otherwise. Cite this article:
John Barbirolli Facts for Kids. Kiddle Encyclopedia.