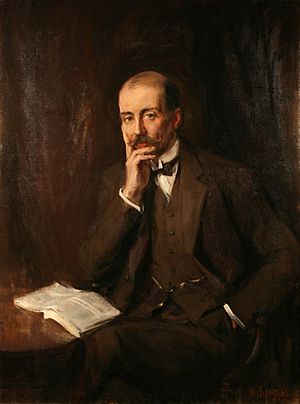 Boult was born in Chester. He went to school in Westminster School and studied at Christ Church, Oxford. He then went to the Leipzig Conservatory where he learnt to conduct by watching the great Hungarian conductor Arthur Nikisch. He sang in choral festivals and at the Leeds Festival of 1913, where he went to watch Nikisch conduct.

During World War I he worked for the War Office, and while he was there in 1918 he planned a series of concerts with the London Symphony Orchestra, which included several important new British works including Gustav Holst's The Planets, A London Symphony by Ralph Vaughan Williams, and Elgar's Symphony No. 2. When Boult was a boy he had already met Elgar. Elgar now wrote to him and said he felt sure the future of his music was safe in Boult's hands. Boult was at the start of a great career in which he conducted a lot of 20th century British music.

Birmingham and the BBC

Boult became famous for conducting a wide repertoire, including the very modern-sounding music of Arnold Schoenberg. In 1933 he married Ann Wilson, the ex-wife of the singer and administrator Steuart Wilson. The marriage lasted until Boult's death. Boult was knighted in 1937.

War years and after

During World War II the BBC Symphony Orchestra was evacuated to Bristol. Even there it was not safe from the bombing and they moved again to Bedford. After the war the BBC started the BBC Third Programme and Boult was involved in many new plans for concerts and recordings.

In 1948, Steuart Wilson became Director of Music at the BBC. Some people were saying that the music on the BBC was not so good and that Boult ought to retire when he became 60 in 1949. He then became conductor of the London Philharmonic Orchestra with whom he made many recordings.

Boult continued to conduct until he was very old. His many recordings, including music he had heard Nikisch conduct many years before. His last public performance was conducting Elgar's ballet The Sanguine Fan for London Festival Ballet at the Coliseum, in London on 24 June 1978.

Boult was made a Companion of Honour in 1969.

Boult wrote two books about conducting, Thoughts on Conducting and A handbook on the technique of conducting. He also wrote an autobiography: My Own Trumpet (the expression “to blow one’s own trumpet” means: “to boast about oneself). He also gave talks on the radio. He spoke in a very polite, formal style.

Boult always conducted with a baton (conductor’s stick). His conducting was very graceful, his movements were very simple and clear.

All content from Kiddle encyclopedia articles (including the article images and facts) can be freely used under Attribution-ShareAlike license, unless stated otherwise. Cite this article:
Adrian Boult Facts for Kids. Kiddle Encyclopedia.