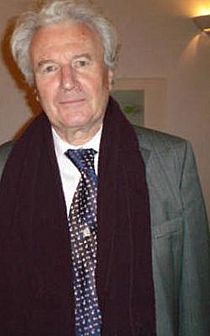 Sir Colin Rex Davis, CH, CBE, (Weybridge, Surrey, 25 September 1927 – London, England 14 April 2013), was a British conductor. He was born in Weybridge, Surrey, UK. Davis went to school at Christ's Hospital before studying the clarinet at the Royal College of Music in London. He was not allowed to take conducting lessons there because he did not play the piano well enough. He still managed to get some experience as conductor of the Kalmar Orchestra with other music students.

In 1952 Davis worked at the Royal Festival Hall, and in the late 1950s conducted the BBC Scottish Symphony Orchestra. He started to become well-known when he was suddenly asked to conduct Wolfgang Amadeus Mozart's opera Don Giovanni at the Royal Festival Hall because Otto Klemperer was ill. A year later, in 1960, he conducted Mozart's The Magic Flute at Glyndebourne because Thomas Beecham was ill.

In the 1960s he worked at Sadler's Wells Opera and with the London Symphony Orchestra. He was Chief Conductor of the BBC Symphony Orchestra. In 1971 he took over from Georg Solti as principal conductor at the Royal Opera House. He stayed there until 1986. He particularly liked conducting the operas of Michael Tippett, giving the first performances of The Knot Garden (1970), and The Ice Break (1977). In 1977 he became the first English conductor to appear at the Bayreuth Festival where he conducted Tannhäuser.

He has received many honours, including CH and CBE

In 1949, Davis married the soprano April Cantelo. They had two children, Suzanne and Christopher. Their marriage ended in 1964, and in that same year, Davis married the young Iranian woman who had been the family au pair, Ashraf “Shamsi” Naini. To satisfy both the Iranian and British authorities, the couple were married three times, once in Iran and twice in the UK, in the Iranian Embassy as well as in a regular UK civil ceremony. They have five children.

On 14 April 2013, it was announced via the London Symphony Orchestra, of which Davis had been the president, that he had died that evening, aged 85, after a short illness.

Davis was not related to the conductor Sir Andrew Davis.

All content from Kiddle encyclopedia articles (including the article images and facts) can be freely used under Attribution-ShareAlike license, unless stated otherwise. Cite this article:
Colin Davis Facts for Kids. Kiddle Encyclopedia.