Christ's Hospital, known colloquially as the Bluecoat School, is an English co-educational independent day and boarding school located south of Horsham in West Sussex. It is a charity school whose fees are calculated on a means test. 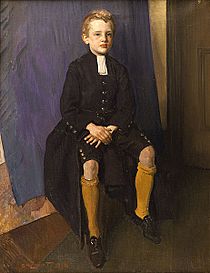 The composer Constant Lambert as a pupil, wearing the traditional uniform (painting by his father, George Lambert)

The school's Tudor uniform consists of belted, long blue coats with knee-breeches, yellow socks, and bands at the neck. The uniform has been in place since 1553. The nickname "Blue-coat School" comes from the blue coats worn by the students – however, the nickname used within the school community itself is "Housey" and the long coat is called a "housey coat".

By 2011 students and alumni stated that they see the uniform as an important way of giving the school a unique identity and unifying the school. Around that time the administrators had discussed the idea of updating the uniform. A few of the school's 800 students voted, over 95% voted in favor of keeping the original uniform. 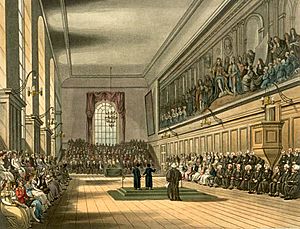 An early 19th-century picture of the Great Hall on St. Matthew's Day. The Verrio painting can be seen along the wall on the right.

Admission of pupils is either by open competitive examination or by "show of skills" — in either case the suitability of candidates is judged according to criteria of need and parental income. 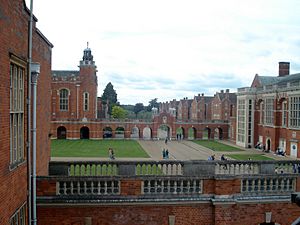 The Quad and Front Avenue, from the Art School

The Christ's Hospital Arts Centre served as a principal arts venue for Horsham and the surrounding area until the establishment of an arts centre in Horsham in the 1980s. A programme of performances continues to be open to the public. 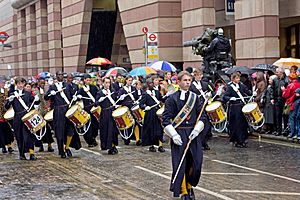 Christ's Hospital Model United Nations programme attempts to develop global citizenship. Its team debates international affairs at conferences, and organises its own for students from other schools.

Christ's Hospital was featured in the first series of the reality television programme Rock School, in which Gene Simmons of Kiss helped a group of pupils form their own rock band. 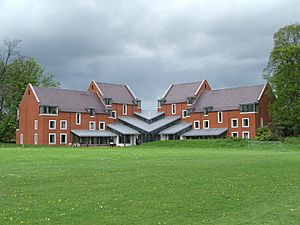 The house system is incorporated with the boarding programme and most pupils are boarders. The school houses are named after notable Old Blues, primarily writers. Each house has an "A" and "B" side, each housing roughly 45 pupils. The houses are arranged from west to east as follows:

All content from Kiddle encyclopedia articles (including the article images and facts) can be freely used under Attribution-ShareAlike license, unless stated otherwise. Cite this article:
Christ's Hospital Facts for Kids. Kiddle Encyclopedia.