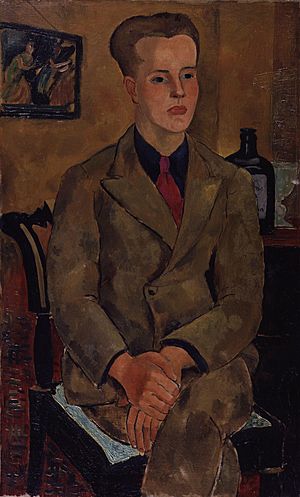 Lambert’s father was the painter George Washington Lambert who had come to England from Australia. Lambert was often ill when he was a child. He went to school at Christ's Hospital and won a scholarship to the Royal College of Music. He soon became interested in French and Russian music. He became friends with other famous people including the Sitwell family, William Walton, Philip Heseltine and Bernard van Dieren. He and Edith Sitwell were the reciters at a performance of Walton’s Façade.

Lambert was a prodigy: he was composing music for orchestra when he was only 13, and when he was 20 he was asked to write a ballet for Serge Diaghilev's world-famous Ballets Russes (Romeo and Juliet).

He soon became very famous. His best known work is The Rio Grande for piano solo, chorus and orchestra. It has a mixture of musical styles: jazz, habaneras and the influence of Delius and Duke Ellington.

During the 1930s he performed a lot as a conductor with the Vic-Wells Ballet (later the Royal Ballet), but he stopped composing music. Lambert thought he had failed as a composer, and only finished two more big works in the last sixteen years of his life. He continued conducting, and appeared at Covent Garden and in BBC broadcasts, and travelled to Europe and America conducting ballets. He was an excellent ballet conductor and helped the dancers to give their best performance.

During the war he became ill. He refused to see a doctor. He was working very hard and also drinking a lot.

Lambert liked jazz and thought it was an important influence on popular culture of the time. He wrote a book about this, called Music Ho! (1934). The book is widely read today, although it shows a very personal approach to music.

Lambert was married twice. His first marriage was to Florence Kaye. He later married Isabel Nichols, an artist, in 1947. After Constant Lambert's death, Isabel married the composer Alan Rawsthorne.

Lambert died on 21 August 1951. He had pneumonia and it was also found that he had diabetes made worse by alcoholism.

All content from Kiddle encyclopedia articles (including the article images and facts) can be freely used under Attribution-ShareAlike license, unless stated otherwise. Cite this article:
Constant Lambert Facts for Kids. Kiddle Encyclopedia.