The Sitwells facts for kids 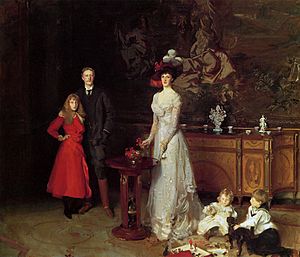 The Sitwells (Edith Sitwell, Osbert Sitwell, Sacheverell Sitwell), from Scarborough, North Yorkshire, were three siblings who formed an identifiable literary and artistic clique around themselves in London in the period roughly 1916 to 1930. This was marked by some well-publicised events, notably Edith's Façade with music by William Walton, with its public debut in 1923. All three Sitwells wrote; for a while their circle was considered by some to rival Bloomsbury, though others dismissed them as attention-seekers rather than serious artists.

The first Sitwell venture was the series of Wheels anthologies produced from 1916. These were seen either as a counterweight to the contemporary Edward Marsh Georgian Poetry anthologies, or as light 'society verse' collections. They did not really match the Imagist anthologies of the same years, or the modernist wing, in terms of finding poets with important careers ahead of them, but included both Nancy Cunard and Aldous Huxley.

Barry of eight or and vert, charged with three lions rampant sable. The motto is Ne cede malis (Latin: Yield not to misfortune).

Wood End, the former family home of the Sitwells in Scarborough has been redeveloped into a "creative industries centre" providing artists' workspace as well as administrative and learning spaces.

There is a coffee shop in Cincinnati, Ohio, named Sitwell's Coffee House in honour of Edith Sitwell.

A large collection of the Sitwells' papers reside at the Harry Ransom Humanities Research Center at The University of Texas, Austin.

A poem by Ogden Nash contains a reference to the family: "How many miles to Babylon? / Love-in-a-mist and Bovril. / Are there more Sitwells than one? / Oh yes, there are Sacheverell."

All content from Kiddle encyclopedia articles (including the article images and facts) can be freely used under Attribution-ShareAlike license, unless stated otherwise. Cite this article:
The Sitwells Facts for Kids. Kiddle Encyclopedia.