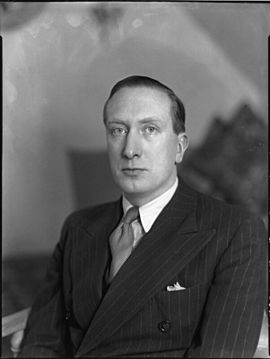 Sir William Walton OM, (born Oldham, 29 March 1902; died Ischia, Italy, 8 March 1983) was a British composer and conductor. He was one of the most important British composers of the mid-20th century, a period that included Benjamin Britten and Michael Tippett. His music has very lively rhythms which are often jazzy.

Walton’s family were musical but they had very little money. Both his parents sang, and Walton sang in the local church choir. His father would hit him if he made a mistake. This may be why in later life he was so careful about every note he wrote.

At the age of ten he joined the choir of Christ Church Cathedral in Oxford. He learned the piano and violin. He was only 16 years when he went to University of Oxford where he was at Christ Church, Oxford. Most of what he knew about composing he taught himself. He studied the scores of works by Stravinsky, Debussy, Sibelius and others. He had some lessons from Hugh Allen, the cathedral organist. At Oxford Walton became friends with two poets: Sacheverell Sitwell and Siegfried Sassoon. Most of the music he wrote when he was very young has been lost, but the choral anthem A Litany, written when he was just fifteen, shows his musical talent with its modern harmonies.

Walton left Oxford in 1920 without a degree having failed his exams three times. He went to live with the Sitwell family, who introduced him to many important people, including the composer Constant Lambert and song writer Noel Coward. He also travelled with the Sitwells to Italy. In 1923 he set one of Edith Sitwell’s poems to music. The piece was called Façade. The music was very jazzy and almost jokey, and it sounded very modern to many people at that time.

During the 1920s, Walton earned some money playing the piano at jazz clubs, but he spent most of his time composing in the Sitwells' attic. The orchestral overture Portsmouth Point (which he dedicated to Sassoon) was the first work which shows Walton’s real style. In 1929 the Viola Concerto started to make him really famous. This was followed by Belshazzar's Feast (1931), the Symphony No. 1 (1935), the coronation march Crown Imperial (1937), and the Violin Concerto (1939). All these works are very popular today.

During World War II, Walton did not have to do military service so that he had time to compose music for propaganda films, such as The First of the Few (1942), and Laurence Olivier's adaptation of Shakespeare's Henry V (1944). After composing a second string quartet (1946) Walton spent most of the next seven years writing his opera, Troilus and Cressida (1947-1954). The opera was not very popular. This was because his music was rather Romantic, very different from a lot of modern music that was in fashion in the 1950s, especially the music of Pierre Boulez and his followers.

Walton also composed the music for two more Shakespeare-Olivier films - the Academy Award-winning Hamlet, and Richard III. Walton, however, did not win Oscars for any of his Shakespeare-based scores.

Walton then started to write more orchestral music: the Cello Concerto (1956), the Symphony No. 2 (1960), and the Variations on a Theme by Hindemith (1963). He started to have many honours: He was knighted in 1951 and received the Order of Merit in 1968. People liked his one-act comic opera The Bear, when it was performed at the Aldeburgh Festival in 1967, and he was asked by people from all over the world for new music. His song-cycles from this period were given their first performances by famous singers such as Peter Pears and Elisabeth Schwarzkopf.

In his last years, Walton found composition more and more difficult. He tried to compose a third symphony for André Previn, but later gave up. His last works were mostly church music or reworkings of older pieces.. He had settled on the island of Ischia in Italy in 1949 with his Argentinian wife Susana Gil. He died there in 1983.

Since his death, Walton's music has been performed and recorded a lot. People no longer think of him as old-fashioned, but as a composer who had a very strong personality which can be heard clearly in his music.

All content from Kiddle encyclopedia articles (including the article images and facts) can be freely used under Attribution-ShareAlike license, unless stated otherwise. Cite this article:
William Walton Facts for Kids. Kiddle Encyclopedia.