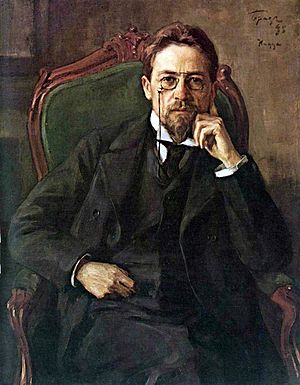 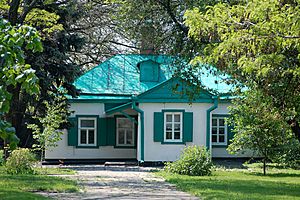 The house where Chekhov was born

Anton Chekhov was born in Taganrog, which is a city in Russia. His father, Pavel, was the owner of a grocery store. His mother, Yevgeniya, sometimes told Anton stories about her childhood.

In 1876, Chekhov's father went bankrupt. From then on, Chekhov's family was very poor. Anton Chekhov had to pay for his own education. He paid for it by tutoring (teaching) other students, catching birds and selling them, and writing short stories for newspapers. When he had extra money, he sent it to his family. While he was at school, he read many books by famous authors, for example Miguel de Cervantes and Arthur Schopenhauer.

In 1879, Chekhov went to Moscow University.

While he was at Moscow University, Chekhov wrote many short stories to pay for his schooling and to help his family. In 1886, one of the most famous newspapers in Russia, New Times, asked him to write stories for them. Soon, his stories started to get famous, and other writers read his work and liked it. He wrote a book of stories called At Dusk that won the Pushkin Prize, an award for good writing.

In 1887, Chekhov wrote a play called Ivanov. Chekhov did not like the play, but critics loved it.

In 1890, Chekhov went to Sakhalin Island, a penal colony (prison). He talked to many prisoners and found out that they were treated very badly. The prisoners were often beaten. There were also children there. He was angry, and wrote about it in a book called The Island Of Sakhalin and in a short story called The Murder.

In 1892, he bought a house and some land near Moscow called Melikhovo. While he was there, he helped the people who lived nearby. He brought them food and clothing, and medicine when they were sick. Since he was trained as a doctor, he knew how to take care of them.

While at Melikhovo, he started to write a play called The Seagull. When it was first performed, it went very badly, and the audience did not like it. Later, it was performed at another theater, the Moscow Art Theater, where the performances went better. Soon after this, he had another play performed, called Uncle Vanya. He later wrote two more great plays: Three Sisters and The Cherry Orchard. All four plays are still often performed today.

In 1897, he became sick. Doctors told him that he had tuberculosis, a lung disease, and that he should change his life to be healthier. He moved to Yalta and bought a house there. In 1901 he married a woman named Olga Knipper. At Yalta, he wrote some of his most famous stories, including a story called The Lady With The Dog.

By 1904, Chekhov was very sick. He died on the 15th of July in Germany. Thousands of people were very sad when he died. He was buried in Novodevichy Cemetery.

Chekhov influenced many important writers, including George Bernard Shaw, James Joyce, and Virginia Woolf. His short stories are still read by many people around the world.

. All Constance Garnett's translations of the short stories and letters are available, plus the edition of the Note-book translated by S.S. Koteliansky and Leonard Woolf (see the "References" section for print publication details of all of these). The site also has translations of all the plays.

All content from Kiddle encyclopedia articles (including the article images and facts) can be freely used under Attribution-ShareAlike license, unless stated otherwise. Cite this article:
Anton Chekhov Facts for Kids. Kiddle Encyclopedia.