Kathleen Mansfield Murry (née Beauchamp; 14 October 1888 – 9 January 1923) was a prominent New Zealand modernist short story writer who was born and brought up in colonial New Zealand and wrote under the pen name of Katherine Mansfield. At the age of 19, Mansfield left New Zealand and settled in England, where she became a friend of writers such as D.H. Lawrence and Virginia Woolf.

In 1917, she was diagnosed with extrapulmonary tuberculosis, that claimed her life at age 34. Mansfield was a prolific writer in the final years of her life. Much of her work remained unpublished at her death. 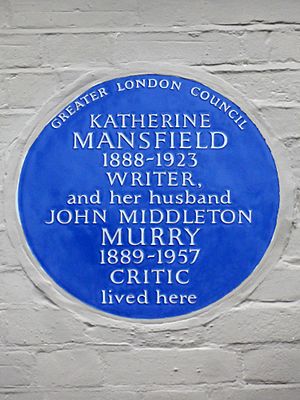 She has also been honoured at Karori Normal School in Wellington, which has a stone monument dedicated to her with a plaque commemorating her work and her time at the school, and at Samuel Marsden Collegiate School (previously Fitzherbert Terrace School) with a painting, and an award in her name.

There is a Park dedicated to her in Thorndon. A street in Menton, France, where she lived and wrote, is named after her. A fellowship is offered annually to enable a New Zealand writer to work at her former home, the Villa Isola Bella, and New Zealand's pre-eminent short story competition is named in her honour.

Mansfield was the subject of the 1973 BBC miniseries A Picture of Katherine Mansfield, starring Vanessa Redgrave. The six-part series included adaptations of Mansfield's life and of her short stories. In 2011, a television biopic titled Bliss was made of her early beginnings as a writer in New Zealand; she was played by Kate Elliott.

All content from Kiddle encyclopedia articles (including the article images and facts) can be freely used under Attribution-ShareAlike license, unless stated otherwise. Cite this article:
Katherine Mansfield Facts for Kids. Kiddle Encyclopedia.