A poet is a person who creates poetry. Poets may describe themselves as such or be described as such by others. A poet may simply be a writer of poetry, or may perform their art to an audience. 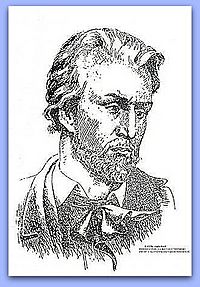 Postmortal fictional portrait of Slovak poet Janko Kráľ (1822–1876) – an idealized romanticized picture of "how a real poet should look" in Western culture.

Poets have existed since antiquity, in nearly all languages, and have produced works that vary greatly in different cultures and periods. Throughout each civilization and language, poets have used various styles that have changed through the course of literary history, resulting in a history of poets as diverse as the literature they have produced. 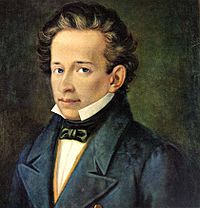 The Italian Giacomo Leopardi was mentioned by the University of Birmingham as "one of the most radical and challenging of nineteenth-century thinkers".

All content from Kiddle encyclopedia articles (including the article images and facts) can be freely used under Attribution-ShareAlike license, unless stated otherwise. Cite this article:
Poet Facts for Kids. Kiddle Encyclopedia.