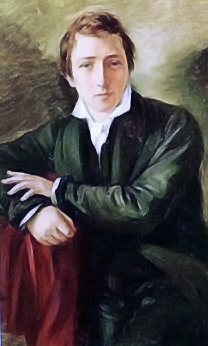 Christian Johann Heinrich Heine (born as Harry Heine 13 December 1797–17 February 1856) was one of the most significant German poets of the 19th century.

Heine was born into an assimilated Jewish family in Düsseldorf, Germany. His father was a tradesman. After his father's business failed, Heine was sent to Hamburg. His uncle in Hamburg was a very successful banker, so Heine started learning his business, but he droped it later on. Then Heine started to study law at the universities of Göttingen, Bonn and Berlin, but he was more interested in literature than in law. He took a degree in law in 1825. At the same time he had decided to convert from Judaism to Protestantism. This was necessary because of the severe restrictions on Jews in the German states. Only Christians were allowed to have certain businesses or to be clerks of the state. Jews were also forbidden to become university professors, which was a particular ambition for Heine. Heine himself said, his conversion was "the ticket of admission into European culture". Heine is best known for his lyric poetry, much of which was set to music by lieder composers, esp. Franz Schubert and Robert Schumann.

His start as poet Heine made with Gedichte ("Poems") in 1821. Heine's one-sided infatuation with his cousins Amalie and Therese later inspired him to write some of his loveliest lyrics; Buch der Lieder ("Book of Songs", 1827) was Heine's first comprehensive collection of verse.

Heine left Germany for Paris, France in 1831. There he associated with utopian socialists. He met people who fellowed Count Saint-Simon, who preached an egalitarian classless society.

He remained in Paris for the rest of his life. His only visit to Germany was in 1843. German authorities banned his works and those of others who were considered to be associated with the Young Germany movement in 1835.

Heine continued to comment on German politics and society from a distance. Heine wrote Deutschland. Ein Wintermärchen (Germany. A Winter's Tale). In 1844; his friend, Karl Marx, published it in his newspaper Vorwärts ("Forward") in 1844.

One of the books was burned by the Nazis. One of Heine's most famous lines is now: "Where they burn books, they will, in the end, burn human beings too" (Almansor, 1821). 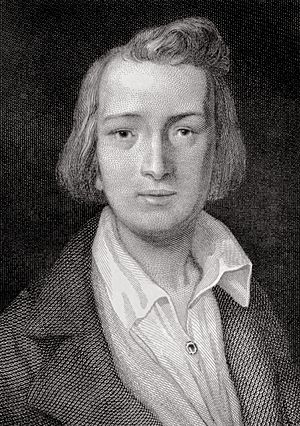 Heinrich Heine “Take to the road!”

If you are let down and betrayed by a girl,
Don't bother but find a new one.
Much better though - you took to the road,
Tie up your backpack and wander!

You will quickly come up to a blue awesome lake,
Encircled by big weeping willows.
You may here cry about your little ache,
Your intimate pains and sorrows.

And when you that smashing height will have climbed,
You will be heavily sighing.
Still, as you get to that rocky peak,
You will hear the eagles cawing.

And there you are – as an Eagle yourself!
You are as if a newborn.
You feel at ease, you feel you have not lost
That much down there below! 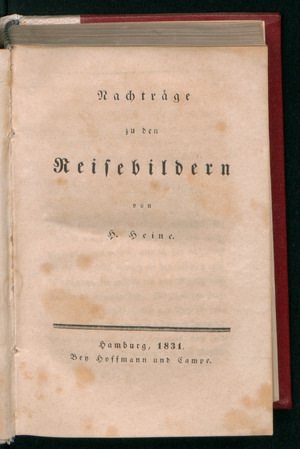 All content from Kiddle encyclopedia articles (including the article images and facts) can be freely used under Attribution-ShareAlike license, unless stated otherwise. Cite this article:
Heinrich Heine Facts for Kids. Kiddle Encyclopedia.