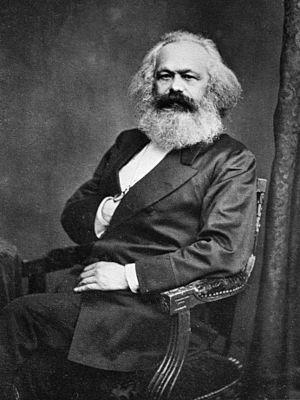 Jenny von Westphalen and Karl Heinrich Marx regularly met each other as children. She was four years older than Karl. They became close friends as teenagers. Both of them were well-read and literary, and they soon began courting. According to Marx, she was the most beautiful girl in the town of Trier.

Her father, Ludwig von Westphalen, a friend of Marx's father, also befriended the teenage Marx, and would often go on walks with him, where they would discuss philosophy and English literature. Jenny and Karl became engaged in 1836. They eventually married on 19 June 1843 in the Kreuznacher Pauluskirche (the Kreuznach church of Saint Paul), Bad Kreuznach. Following their marriage, Karl and Jenny Marx moved to Rue Vaneau in Paris. They had seven children.

In later years Jenny Marx suffered from internal pains, diagnosed as liver cancer. Following a family visit to France, she died in London at the age of 67 on 2 December 1881. She was buried in Highgate Cemetery, London, as was Karl Marx. In 1954, her remains were transferred, along with those of her husband and other family members, to a new grave, over which was constructed a memorial.

All content from Kiddle encyclopedia articles (including the article images and facts) can be freely used under Attribution-ShareAlike license, unless stated otherwise. Cite this article:
Jenny von Westphalen Facts for Kids. Kiddle Encyclopedia.