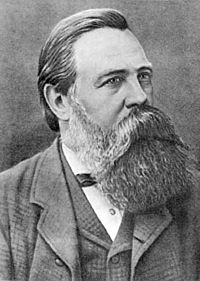 Friedrich Engels II (28 November 1820 – 5 August 1895) was a German political thinker. With his best friend Karl Marx, Engels wrote about Communism. They wrote the famous book The Communist Manifesto together.

Friedrich Engels II was born in Barmen, Germany in 1820. His father was a very rich factory owner, and he sent Friedrich to England to run one of the factories. The way the workers were living at his father's factories made Engels upset with the class system. At about this time, he began to write about politics and workers' struggles.

In 1844 he met Karl Marx in France and the two became friends and began to write together. The two men worked together until Marx's death in 1883.

After Marx died, Engels spent the rest of his life editing and translating Marx' writings. He also wrote about women and marriage. He died of throat cancer in London in 1895.

All content from Kiddle encyclopedia articles (including the article images and facts) can be freely used under Attribution-ShareAlike license, unless stated otherwise. Cite this article:
Friedrich Engels Facts for Kids. Kiddle Encyclopedia.