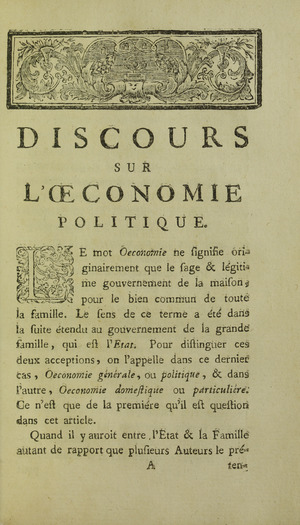 Political economy was the original term for the study of production, the acts of buying and selling, and their relationships to laws, customs and government.

It developed in the 17th century as the study of the economies of states which placed the theory of property in the theory of government.

Some political economists proposed the labour theory of value (first introduced by John Locke, developed by Adam Smith and later Karl Marx), according to which labour is the real source of value. Many political economists also looked at the accelerating development of technology, whose role in economic and social relationships grew ever more important.

In late 19th century, the term "political economy" was generally replaced by the term economics, which was used by those seeking to place the study of economy on a mathematical basis, rather than studying the relationships within production and consumption.

In the present, political economy means a variety of different, but related, approaches to studying economic and political behavior, which range from combining economics with other fields, to using different fundamental assumptions which challenge those of orthodox economics:

Disciplines which relate to political economy

Because political economy is not a unified discipline, there are a variety of studies that use the term which have overlapping subject matter, but radically different viewpoints.

Sociology is the study of the effects of involvement in society on individuals as members of groups, and how this changes their ability to function. Many sociologists begin from a framework of production determining relationship drawn from Karl Marx.

Psychology is frequently the fulcrum around which political economy centers, in that it deals with decision making, not as being a black box whose effects are seen only in price decisions, but as being a source of study, and therefore the assumptions in a model of political economy.

History since it documents change over time, is often used as a means of arguing in political economy, and often historical works have a framework of political economy which they assume or argue as the basis for the narrative structure.

Law since it concerns the creation of policy, or the mediation of policy ends through political acts which have specific individual results, is seen, in political economy, as both political capital and social infrastructure, on one hand - and as the result of the sociology of a society on the other.

Ecology is often involved in political economy, because human activity is one of the single largest effects on the environment, and because it is the suitability of the environment for human beings which is one of the central concerns of most human beings. The ecological effects of economic activity on the environment have spurred the creation of a great deal of research studying means of changing the incentives balance of the market economy. This work is particularly controversial in its interaction with economics, since it questions the fundamental econometric assumptions of market economics and their basic validity.

All content from Kiddle encyclopedia articles (including the article images and facts) can be freely used under Attribution-ShareAlike license, unless stated otherwise. Cite this article:
Political economy Facts for Kids. Kiddle Encyclopedia.