Alexander Hamilton (January 11, 1755 – July 12, 1804) was a statesman, a political theorist and an economist. He was one of the Founding Fathers of the United States. Hamilton was the United States' first Secretary of the Treasury. He was known for the creation of a national bank. Born on the island of Nevis in the Caribbean, Hamilton moved to New York City. When the American Revolutionary War started, Hamilton served in the Continental Army. He was a close aide to General George Washington. After leaving the military he started a bank. He was one of the framers of the United States Constitution. Along with James Madison and John Jay, he wrote the Federalist Papers, which supported the new Constitution.

Hamilton became the Secretary of the Treasury under George Washington. He helped set up the United States' financial system. Hamilton supported a national bank as well as the funding of the national debt. A leader of the Federalist Party, he was a long time rival of Thomas Jefferson. He was killed in a duel with political rival Aaron Burr in 1804.

Today, Hamilton is usually thought of as one of the most important of the early leaders. Hamilton's portrait appears on the United States ten-dollar bill.

In 1772 Hamilton went to New York to continue his education. He attended Kings College (now called Columbia College, part of Columbia University) until 1776.

Early in the American Revolution Hamilton was an artillery officer. Later he served on George Washington's staff. Hamilton believed by the late 1780s that the Articles of Confederation made a government that was too weak to work well, and he supported drafting a new document. He was a delegate to the Constitutional Convention, and he was a signer of the Constitution.

In 1789 he was co-author of the Federalist Papers, a series of letters written by Hamilton, John Jay, and James Madison under the name "Publius." Hamilton wrote about two-thirds of the essays. They were published in newspapers in New York and supported the new Constitution. These writings are usually thought of as being one of the most important American works on politics and government. They are still widely read today.

George Washington, who became President in 1789, chose Hamilton to be the first United States Secretary of the Treasury. While in this job, he supported a national bank and invented a way to pay the debt that the country owed for the Revolutionary War. He helped start the Federalist Party. John Adams was a member, and Washington supported the party though he was not a member. After being Secretary of the Treasury he worked as a lawyer and continued to lead the Federalist Party.

Hamilton said he was very anti-slavery. Along with John Jay he was a leader of the New York Manumission Society. The society worked to end slavery in New York by getting slave owners to choose to free their slaves. However, he bought and sold slaves for himself, his family, and his friends.

Hamilton also had great respect for the small Jewish community in America and was a major supporter of religious freedom.

In 1800 Hamilton's political rival Thomas Jefferson beat the Federalist John Adams. Jefferson and Hamilton had very different ideas about the direction the new country should take, although both were important founding fathers.

Hamilton had a long-time rivalry with Jefferson's vice president Aaron Burr. This resulted in the Burr–Hamilton duel of 1804 in which Burr killed Hamilton. Hamilton kept Burr from being re-nominated for Vice President. He also kept him from becoming Governor of New York. Burr responded by challenging Hamilton to a duel. They agreed to meet July 11, 1804 at Weehawken, New Jersey. Dueling was illegal in New York which is why they chose Weehawken. It was also the site where Philip Hamilton, Alexander Hamilton's son, had been killed in a duel three years earlier. The night before the duel, Hamilton wrote his will, letters to friends, and finally a letter to his wife.

At dawn the next morning the two met at Weehawken. Without any discussion, the two men took their positions. Unusual for a duel of this kind, the two fired about 4–5 seconds apart. Who fired first is not known today. Burr's bullet struck Hamilton and knocked him down. Then Burr promptly turned and left. The bullet went through Hamilton's ribs, and damaged his lungs and liver. Hamilton was taken to a friend's house in Manhattan where his wife and children joined him. He asked two ministers to give him Communion but was refused. Finally the Episcopal Bishop Benjamin Moore gave him the sacrament. Hamilton died the next morning.

Hamilton on the US $10 bill

He was a staunch constitutionalist who, unlike several of the founding fathers, believed in a strong central government. During his life he was involved in nearly every major political event from the Revolution to the election of 1800. 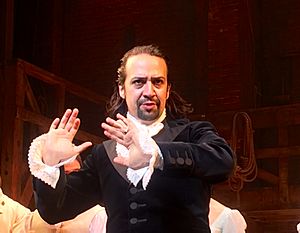 Lin-Manuel Miranda performs the title role in the 2015 musical Hamilton.

All content from Kiddle encyclopedia articles (including the article images and facts) can be freely used under Attribution-ShareAlike license, unless stated otherwise. Cite this article:
Alexander Hamilton Facts for Kids. Kiddle Encyclopedia.