Battle of Germantown facts for kids

The Battle of Germantown was a battle in the Philadelphia campaign of the American Revolutionary War fought on October 4, 1777 in the area surrounding Germantown, Pennsylvania. The battle, which was a victory for the British, guaranteed that the revolutionary capital of Philadelphia would remain in British hands throughout the winter of 1777 and 1778.

The campaign in Philadelphia had begun quite badly for the American forces. Washington had suffered successive defeats at the Battle of Brandywine and the Battle of Paoli that left Philadelphia, the revolutionary capital, undefended. After the September 26, 1777, occupation of Philadelphia by Charles Cornwallis, William Howe left 3,000 men to defend the newly-captured provincial capital and moved 9,000 men to Germantown, five miles (8 km) north of Philadelphia, determined to locate and destroy the American forces. Howe situated his headquarters at Stenton, the former country home of James Logan.

Washington was determined to attack the British garrison in Germantown as the last effort of the year before the onset of winter. His plan was to simultaneously attack the British with four columns from different directions during the night, with the goal of creating a double envelopment. Washington also hoped to surprise the British and Hessian armies in much the same way he had surprised the Hessians at the Battle of Trenton.

Germantown was a hamlet of stone houses from what is now known as Mount Airy on the north to what is now Wayne Junction on the south. Extending southwest from the Square was Schoolhouse Lane, running a mile and a half to the point where Wissahickon Creek emptied from a steep gorge into the Schuylkill River. General William Howe had established a base camp along the high ground of Schoolhouse and Church lanes. The western wing of the camp, under the command of the Hessian general Wilhelm von Knyphausen, had a picket of two Jäger battalions at its left flank on the high ground above the mouth of the Wissahickon. A Hessian brigade and two British brigades camped along Market Square, and east were two British brigades under the command of General James Grant, as well as two squadrons of dragoons, and the 1st Battalion of the Light Infantry regiment. The Queen's Rangers, a New York loyalist unit, covered the right flank.

The Americans March Out

The American army left camp just after dusk on October 3 1777. The British and Hessian forces had no idea that American troops were advancing on them. For the Americans, it seemed their second attempt at another Trenton was going to succeed. The night made communications between the columns very difficult, and progress was not as speedy as expected. At dawn, the American army was well short of their starting lines, and with the onset of daylight, they also lost the element of surprise. One column of American militia had managed however, to reach the British camp. 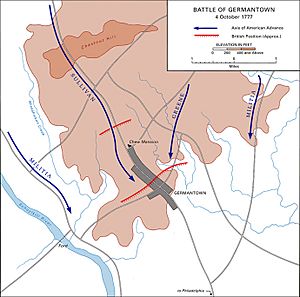 The vanguard of Sullivan's column began the battle when they opened fire on the British pickets of light infantry at Mount Airy just as the sun was rising at around 5am. A thick fog clouded the field which smothered the battlefield for the rest of the day. The British pickets resisted strongly against the advancing American forces, who fired their guns to warn of the attack. Howe rode forward, thinking that they were being attacked by foraging or skirmishing parties.

It took a substantial part of Sullivan's division to finally overwhelm the British pickets and drive them back into Germantown. Now cut off from the main British and Hessian force, Colonel Musgrave caused his six companies of troops from the 40th Regiment, around 120 men, to fortify the stone house of Chief Justice Chew, called Cliveden. The American forces launched furious assaults against Cliveden, but the greatly outnumbered defenders beat back the attackers, inflicting heavy casualties. Gen. Washington called a council of war to decide how to deal with the distraction. Some of the officers favored bypassing the Chew House and leaving a regiment behind to deal with it. However, Brig. Gen. Henry Knox recommended to Washington that no occupied enemy garrison should be left in power in the rear of a forward advance. Washington concurred.

General William Maxwell's brigade, which had been held in the reserve of the American forces, was brought forward to storm the Chew mansion, while Knox, who Washington's artillery commander, positioned four three-pounders out of musket range and fired point-blank shots against the mansion. However, the bombardments were unsuccessful against the thick walls of Cliveden. Infantry assaults launched against the mansion were cut down, with heavy casualties suffered. The few Americans who reached the house or who managed to get inside were shot or bayoneted. It was becoming clear that not only was the Chew House not going to give up easily, the attack was beginning to falter and lose momentum.

Meanwhile, Gen. Nathanael Greene's column on the Limekiln Road managed to catch up with the American forces at Germantown. The vanguard of his column engaged the British pickets at Luken's Mill and drove them off after a savage skirmish. Adding to the heavy fog that already obscured the Americans' view of the enemy was the smoke from cannons and muskets, and Greene's column was thrown into disarray and confusion. One of Greene's brigades, under the command of Gen. Stephen, veered off course and began following Meetinghouse Road instead of converging with the rest of Greene's forces on Market Square. The wayward brigade collided with the rest of American Gen. Wayne's brigade and mistook Wayne's men for the redcoats. The two American brigades opened heavy fire on each other, became badly disorganized, and fled. The withdrawal of Wayne's brigade left Conway's left flank unsupported.

In the north, an American column led by McDougall came under attack by the Tory Loyalist troops of the Queen's Rangers and the Guards of the British reserve. After a savage battle between the two, McDougall's brigade was forced to retreat, suffering heavy losses. Still convinced, however, that they could win, the Colonial 9th Virginian troops of Greene's column launched a savage attack on the British and Hessian line as planned, managing to break through and capturing a number of prisoners. However, they were soon surrounded by two British brigades who launched a devastating countercharge, led by Gen. Cornwallis. Cut off completely, the 9th Virginian Regiment was forced to surrender. Greene, upon learning of the main army's defeat and withdrawal, realized that he stood alone against the whole British and Hessian force, so he withdrew as well.

The large, main attacks on the British and Hessian camp had been repulsed with heavy casualties. Washington ordered Armstrong and Smallwood's men to withdraw. Maxwell's brigade, still having failed to capture the Chew House, was forced to fall back. Part of the British army rushed forward and routed retreating Americans, pursuing them for some nine miles before giving up the chase in the face of resistance from Greene's infantry, Wayne's artillery guns and a detachment of dragoons, as well as the nightfall.

Of the 11,000 men Washington led into battle, 152 (30 officers and 122 men) were killed and were 521 wounded (117 officers and 404 men). Over 400 were captured, including Colonel Mathews and the entire 9th Virginia regiment. General Francis Nash was mortally wounded, and died on October 7. 57 Americans were killed attacking the Chew House. British casualties were 70 killed (4 officers and 66 men) and 450 wounded (30 officers and 420 men). British officers killed in action included General James Agnew and Lieutenant-Colonel John Bird. Lieutenant-Colonel Walcott of the 5th Regiment of Foot was mortally wounded.

The battle was a victory for the British and Hessians mainly because it prevented the capture of both Germantown and possibly Philadelphia.

Washington's plan was a failure because of several factors:

However the British had failed to pursue the retreating Americans, and unknown at the time, the battle would have a long term positive impact for the Americans. The French, impressed by Washington's willingness to launch a counter attack, began to push for war. They saw that the Americans were really willing to give an all out effort to win the war.

The dog at the Battle of Germantown 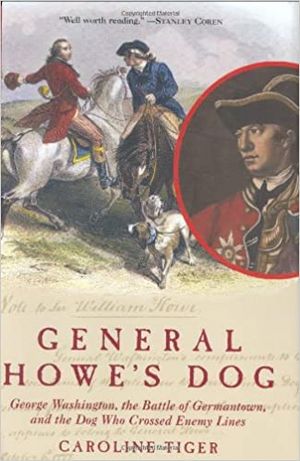 On October 6, there was a brief cease-fire.

A little Fox Terrier that was identified from its collar as belonging to General Howe was formally transferred from Washington's camp to Howe's under a flag of truce.

The Fox Terrier named Lila, that had been found wandering on the battlefield was brought to George Washington, who had the dog fed, cleaned and brushed before being returned to Howe.

Author Caroline Tiger wrote a book about the incident in 2005.

All content from Kiddle encyclopedia articles (including the article images and facts) can be freely used under Attribution-ShareAlike license, unless stated otherwise. Cite this article:
Battle of Germantown Facts for Kids. Kiddle Encyclopedia.