Mount Airy is a neighborhood of Northwest Philadelphia in the U.S. state of Pennsylvania. 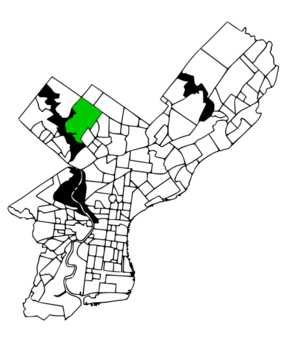 Mount Airy is bounded on the northwest by the Cresheim Valley, which is part of Fairmount Park. Beyond this lies Chestnut Hill. On the west side is the Wissahickon Gorge, which is also part of Fairmount Park, beyond which lies Roxborough and Manayunk. Germantown borders the southeast of Mount Airy, and Stenton Avenue marks the northeast border. Beyond Stenton Avenue is Cedarbrook and West Oak Lane.

The USPS does not officially correlate neighborhood names to Philadelphia ZIP codes (all are called simply "Philadelphia" or "Phila"). However, the 19119 ZIP code is almost entirely coterminous with the cultural-consensus boundaries of Mount Airy.

There is no official boundary between Mount Airy and Germantown. The most common consensus is that Johnson Street is the de facto boundary; however, the West Mount Airy Neighbors and East Mount Airy Neighbors organizations consider Washington Lane to be Mount Airy's southern edge. The question is moot, however, as the two neighborhoods blend together very gradually. Historically, the entire area was part of the German Township. Many buildings in Mount Airy carry the identity and even the name of Germantown in one way or another. For example, the Unitarian Society of Germantown, the Germantown Jewish Centre, the Germantown Christian Assembly, and the Germantown Montessori School are all in Mount Airy, yet also belong culturally to Germantown. Parts of the Battle of Germantown in 1777 occurred throughout Mount Airy. The special relationship linking the two has its roots in the time before the Act of Consolidation, when Germantown was a borough separate from the City of Philadelphia, and its rural environs were what is now Mount Airy.

William Allen, a prominent Philadelphia merchant and Chief Justice of the Province of Pennsylvania, created his summer estate and mansion on Germantown Avenue at Allens Lane in 1750, and the area eventually took the building's name, Mount Airy, as its own. Before this, the area which makes up the modern neighborhood of Mount Airy was part of two sections of the original Germantown Township (which covered all of Germantown, Mount Airy, and Chestnut Hill), Cresheim and Beggarstown.

The village or Dorfshaft of Krisheim (also known as Cresheim) has its origins in the original land divisions of Germantown Township in 1689. It was a section of the township that was allotted to a group of original Germantown settlers who acquired rights to land either directly or indirectly from William Penn. It covered the area from Stenton to Wissahickon Avenues and from Mermaid Lane to roughly Sedgwick Street. The name is derived from a town known today as Kriegsheim in the Palatine in Germany which was the hometown of a few German Quaker families who had settled in Germantown in the 1680s. Throughout much of the 18th century, this area of Germantown Township was known in the land and tax records as simply Cresheim or Cresham. It was at the beginning of the 19th century that the name Mount Airy began to replace Cresheim.

Beggarstown (also Beggars-town or Beggar Town), an area centered along Germantown Avenue between Gorgas Lane and Cliveden Street, was formed out of the so-called "Sidelands" of Germantown. The Sidelands were a section of Germantown Township that had been set aside so that the owners of lots in the center of Germantown could have access to an equal share of land in the entire village of Germantown section of Germantown Township. The portion from which Beggarstown grew covered the area from Upsal Street to roughly Sedgwick Street, Stenton Avenue, and Wissahickon Avenue. As the Germantown village filled up, settlers began to move northwest along Germantown Avenue. By the 1730s and 1740s, the Sidelands area was subdivided into smaller house lots. An account published in 1770 states that the area received its name as a result of its first resident's begging for money to build his house, which later became the home of the Germantown Church of the Brethren. The name for this area disappeared by the late 19th century, and it was sometimes called Pelham, Germantown, or Mount Airy.

The area is recognized by many civil rights groups as one of the first successfully integrated neighborhoods in America. Mount Airy residents organized to resist blockbusting, panic selling, and redlining, especially during the period from the late 1950s to the early 1970s when those practices were prevalent. It continues to be a well-blended neighborhood and was cited in Oprah Winfrey's O magazine for its racial diversity and neighborhood appeal. The community has also been recognized by US News & World Report for racial harmony and balance. 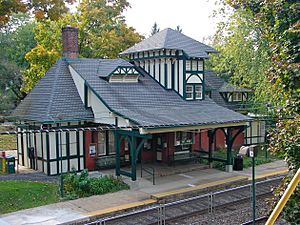 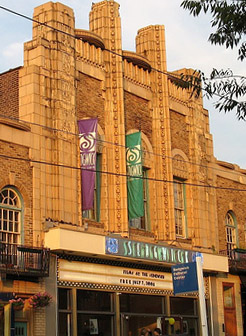 In 2011, the New York Times described the influx of new businesses to Mount Airy as a "cultural revival" buoyed by "the neighborhood's reasonable housing costs and relatively safe streets." In 2013, CNNMoney named Mount Airy one of America's top ten best big-city neighborhoods.

It has been called a "Ph.D. ghetto" because many residents have advanced degrees. The political tone of the neighborhood is predominantly progressive. One prominent Mount Airy politician is former Republican mayoral candidate Sam Katz.

A Hare Krishna community is located on West Allens Lane.

Mount Airy's main commercial district lies along cobblestoned Germantown Avenue, which also serves as the boundary between East and West Mount Airy. The neighborhood has a variety of independent shops, restaurants, art galleries, clothing stores, coffee shops, a gastropub, wine bar, fitness centers, and professional offices. Mt. Airy also has two tented farmers' markets. There are also chain stores such as an Acme Supermarket and a Wawa. The Sedgwick Theater, notable for its art deco style, has been a cultural center in the past, and now houses the Quintessence Theatre Group.

The Weavers Way Co-op, a long-running co-op grocery store in West Mount Airy, also manages two working farms, works with local schools, and provides fresh food to a shelter. Nearby businesses include Big Blue Marble Bookstore, one of Mt. Airy's two independent bookstores. The other, Mt Airy Read & Eat at 7141 Germantown Avenue, is a reincarnation of Walk a Crooked Mile Books which was housed in the Mount Airy train station. Both bookstores are active in promoting community events including readings by local authors and concerts by local musicians.

All content from Kiddle encyclopedia articles (including the article images and facts) can be freely used under Attribution-ShareAlike license, unless stated otherwise. Cite this article:
Mount Airy, Philadelphia Facts for Kids. Kiddle Encyclopedia.