Tribes of Lenape were the first known occupants in the area that became Philadelphia County. The first European settlers were Swedes and Finns who arrived in 1638. The Netherlands seized the area in 1655, but permanently lost control to England in 1674. William Penn received his charter for Pennsylvania from Charles II of England in 1681, and in November 1682 he divided Pennsylvania into three counties. In the same year, Philadelphia was laid out and was made the county seat and the capital of the Province of Pennsylvania.

Penn wanted Philadelphia, meaning "brotherly love", to be a place where religious tolerance and the freedom to worship were ensured. would be found blameless at the Last Judgment.

When established, Philadelphia County consisted mainly of the area from the Delaware River west between the Schuylkill River to the south and the border with Bucks County to the north; the western boundary was undefined. Two counties would be formed out of Philadelphia County, Berks County which was formed in 1752 (from parts of Chester, Lancaster, and Philadelphia counties), and Montgomery County established in 1784. From these separations, as well as other border moves, come the present-day boundaries of the county.

The City of Philadelphia, as laid out by Penn, comprised only that portion of the present day city situated between South and Vine Streets and the Delaware and Schuylkill Rivers. Other settlements were made beyond the boundaries of the city, and in the course of time they became separately incorporated and had separate governments.

Several of these settlements were situated immediately contiguous to the "city proper" of Philadelphia such as Southwark and Moyamensing in the south, the Northern Liberties District, Kensington, Spring Garden and Penn District to the north, and West Philadelphia and Blockley to the west — which combined with the City of Philadelphia formed practically one continuously built up town, the whole group being known abroad simply as Philadelphia.

Besides these, there were a number of other outlying townships, villages and settlements throughout the county. Over time, as the population expanded out from the City of Philadelphia, those closer to the City of Philadelphia became absorbed in the congeries of towns of which greater Philadelphia was composed, while those further away from the city often joined with other townships, villages and settlements to form the newer counties of Berks and Montgomery.

The city-county consolidation was a result of the inability of a colonial-type government by committees to adapt to the needs of a growing city for new public services, for example, better streets, police, transportation, sanitation and schools.

The newly integrated districts had marked characteristics between them, but over time, after the consolidation, these characteristics generally integrated into the City of Philadelphia known today. Today, the names of some of these districts are synonymous with neighborhoods in the city, with their boundaries roughly matching their historic boundaries.

In 1951, a new initiative called the Home Rule Charter fully merged city and county offices. This new charter provided the city with a common structure and outlined the "strong mayor" form of government that is still used today.

Philadelphia has become racially and ethnically diverse over the years, and this process continues. Since 1990, (the year that immigration began increasing), thousands of immigrants from Latin America, Asia and Europe have arrived in the county. Today, the city has some of the largest Irish, Italian, German, Polish, Puerto Rican, Korean, Vietnamese, Russian, Ukrainian, Jamaican, Chinese, Arab, Thai and Cambodian populations in America. The county has the fourth largest concentration of African Americans in North America, including large representations of Liberians, Nigerians, and Sudanese. The Northeast section of the city, and more significantly the suburbs of Philadelphia, contain vast numbers of Indian Americans and Mexicans.

According to the U.S. Census Bureau, the county has a total area of 143 square miles (370 km2), of which 134 square miles (350 km2) is land and 8.6 square miles (22 km2) (6.0%) is water. It is the second-smallest county in Pennsylvania by area. Bodies of water include the Delaware River, Schuylkill River, Cobbs Creek, Wissahickon Creek, and Pennypack Creek. 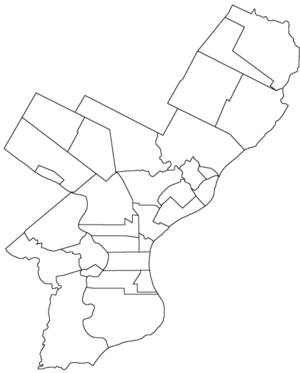 The following districts, townships, and boroughs existed in Philadelphia County before the Act of Consolidation in 1854:

All content from Kiddle encyclopedia articles (including the article images and facts) can be freely used under Attribution-ShareAlike license, unless stated otherwise. Cite this article:
Philadelphia County, Pennsylvania Facts for Kids. Kiddle Encyclopedia.